The Bryans still remember from a decade ago when they could afford to stay in Paris in what was practically only a hole in a wall. When they won the Australian Open this year, they broke a tie for most doubles majors with Australian greats John Newcombe and Tony Roche. 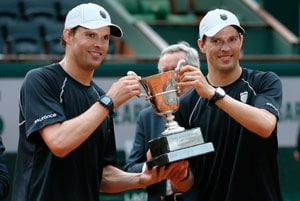 Ten years ago Bob and Mike Bryan were still desperate to win a Grand Slam, living cheap in Paris and sleeping on the floor. Their lives changed for good when they won their first major title in 2003 at the French Open.

"This is the first one we won back in the day and kind of launched our career," Mike said. "This is the toughest Slam to win, I think. Clay is an equalizer and makes a lot of teams better."

The Bryans still remember from a decade ago when they could afford to stay in Paris in what was practically only a hole in a wall.

"It was just kind of a creepy roach motel," Bob said.

Added Mike: "The beds were horrendous. We put everything on the floor."

They didn't have much luck either when they went to a nearby restaurant for a meal.

"I think we lost like 10 pounds each because the food was so bad," Bob said. "We were getting so skinny and losing power on our shots. We had nothing left."

Now the Bryans are married and sleep in comfortable rooms costing 700 euros a night.

When they won the Australian Open this year, they broke a tie for most doubles majors with Australian greats John Newcombe and Tony Roche.

"We're still feeling great," Mike said. "I think 35, I'd probably say right now we're at the peak of our career. Not slowing down yet."

In the tiebreaker, the Bryans rallied from 4-2 down to clinch the victory when Mahut sent a forehand wide. Bob fell to his knees before sharing a hug with Mike, while Mahut broke in tears on his chair.

"They are a very strong team and they showed it again today," Llodra said on the court.

The Bryans celebrated their title in 2003 by partying until the wee hours.

"We were all just grooving, eating our food, and just rocking to the beat," Bob said. "We can't absorb those hard nights anymore. We'll probably go back, pack up, take a shower."

The Bryans overcame a partisan crowd encouraging Llodra and Mahut, who were playing only their second Grand Slam tournament together. Their lack of understanding on the court sometimes showed as Llodra shouted "yours" or "mine" to his partner.

"The crowd was just keeping them kind of pumped up, which made it a little bit tougher," Bob said. "Felt like a Davis Cup match in a lot of ways."

Llodra and Mahut were bidding to become the first Frenchmen to win the doubles at Roland Garros since Yannick Noah and Henri Leconte in 1984.

The Bryans had a scare when Mahut created the only break point of the final set with a backhand return winner at 4-3. But the French team failed to convert it as Llodra sent a forehand return into the net. The Bryans then overtook them in the tiebreaker.

"They played unbelievable," Mike said. "We were lucky. It could have gone either way."