Sixth seed Samantha Stosur of Australia reached the second round at the French Open on Sunday by defeating Britain's Elena Baltacha 6-4, 6-0. 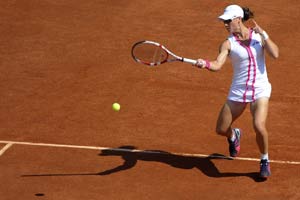 Sixth seed Samantha Stosur of Australia reached the second round at the French Open on Sunday by defeating Britain's Elena Baltacha 6-4, 6-0.

The 2010 runner-up will next play the winner of the tie between Irina Falconi of the United States and Edina Gallovits-Hall of Romania.

The US Open champion got French Open proceedings underway on the Philippe Chatrier centre-court and wasted no time in jumping out into a 3-0 lead over the British number one, ranked 67 in the world.

Stosur served for the first set at 5-3 but was broken, only to use her heavy top spin to again force Baltacha onto the back foot in the next game

After going a set up Stosur earned a break point in the second game of the second set with a confident volley at the net and she took that when Baltacha hit a weak backhand into the net.

A break to love two games later put the Australian 4-0 up and she had no difficulty closing out a one-sided contest in just over one hour.