Maria Sharapova was nearly perfect in the first round of the French Open, winning all 12 games to produce a "double bagel." 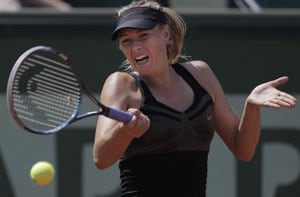 Maria Sharapova was nearly perfect in the first round of the French Open, winning all 12 games to produce a "double bagel."

The second-seeded Russian easily beat Alexandra Cadantu of Romania 6-0, 6-0 Tuesday, needing just 48 minutes to advance to the second round. She finished the match with 18 winners, while Cadantu had zero, but had to save three break points.

Sharapova, who lost in this year's Australian Open final, is looking to complete a career Grand Slam by winning the title at Roland Garros.

After losing the opening game, Kvitova won six straight in the first set against the 16-year-old Australian and again raced through the second set despite being broken once.

The left-handed Czech player won her first Grand Slam title at Wimbledon last year, and then won the WTA Championships. Although she has yet to win a title in 2012, she is seeded fourth at Roland Garros and is expected to make it deep into the tournament.

Barty is the youngest player in the draw at the French Open, one of only eight teenagers entered. The Australian received a wild-card invitation to compete in Paris.

The oldest player in the draw, 41-year-old Kimiko Date-Krumm of Japan, lost to 2010 French Open champion Francesca Schiavone of Italy 6-3, 6-1.

Later Tuesday, defending champion Rafael Nadal will begin his quest for a record-breaking seventh title at Roland Garros. On the women's side, 13-time Grand Slam champion Serena Williams was scheduled to be in action.

On Monday, Roger Federer was stumped only a short time after reaching yet another tennis milestone.

He had just won his 233rd match at a Grand Slam tournament, equaling the Open era record set by Jimmy Connors, and he couldn't remember who he beat to get that first victory.

"Well, I should (know), shouldn't I?" Federer said after defeating Tobias Kamke of Germany 6-2, 7-5, 6-3 in Monday's first round of the French Open. "I know it was in Australia, but I can't remember who I was playing."

He was then reminded that it was Michael Chang.

"Oh, was it?" Federer said, a bit surprised. "Well, that was a beautiful victory, then."

Whether it was or not, it started Federer on a career that has seen him win a record 16 Grand Slam titles and garner a slew of other records along the way.

"I obviously love the big tournaments," Federer said. "I have been so successful for such a long time and to already tie that record - 30 years old is pretty incredible, so I'm very happy."

Along with Federer, top-ranked Novak Djokovic advanced to the second round on Day 2 of the French Open. Djokovic, who is trying to win his fourth straight Grand Slam title, beat Potito Starace of Italy 7-6 (3), 6-3, 6-1.

In the women's tournament, top-ranked Victoria Azarenka won 12 of the final 14 games to come back and beat Alberta Brianti of Italy 6-7 (6), 6-4, 6-2. Defending champion Li Na also progressed, along with No. 3 Agnieszka Radwanska.