Russia on Sunday lavished praised on its "legendary" tennis star Maria Sharapova after her French Open victory, the highpoint of a career that took flight when she left her homeland aged seven. 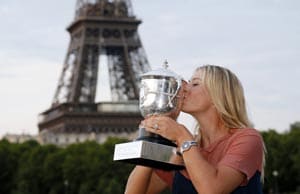 Russia on Sunday lavished praised on its "legendary" tennis star Maria Sharapova after her French Open victory, the highpoint of a career that took flight when she left her homeland aged seven.

President Vladimir Putin and Prime Minister Dmitry Medvedev sent congratulatory telegrams to the Florida-based star while the country's tennis chiefs hoped she would now bring gold for Russia at the London Olympics.

Sharapova cruised past Italy's Sara Errani 6-3, 6-2 to win the French Open final on Saturday and seal a rare career Grand Slam of winning the four biggest tournaments in the sport during her career.

"You have reached the peak which was conquered earlier only by the world's strongest and legendary tennis players - the wining of all four Grand Slam events," Putin said in his message to Sharapova.

"This is a deserved award for your talent and outstanding work," he added.

Medvedev offered his congratulations to the tennis player on his Facebook page. "You showed magnificent play there. All of Russia, millions of your fans across the country supported you and wished you to win there."

Russian tennis fans have always been unstinting in their support of Sharapova, known affectionately by her short name "Masha", even though she resides in the United States and only rarely comes home.

Sharapova has also made clear her loyalty to her home nation, competing in the Fed Cup and almost always wearing a necklace with the cross of the Russian Orthodox Church when she plays.

Her life story has been extraordinary and is shadowed by the world's worst nuclear disaster at Chernobyl in then Soviet Ukraine in 1986.

Her parents were originally from Belarus - the homeland of fellow tennis star and Australian Open winner, the Belarussian Victoria Azarenka.

However shortly before Maria was born they moved to Siberia to avoid the effects of the nuclear disaster as the cloud of dangerous material blew over their Gomel region in the south of the country.

Sharapova was born in the remote northwestern Siberian town of Nyagan. The family then moved to Sochi on the Black Sea where her talent was discovered, with the help of the father of fellow Russian tennis great Yevgeny Kafelnikov.

Barely speaking English, her father Yuri then took her aged seven to attend the Nick Bollettieri Tennis Academy in the United States. Her mother could not join for two years due to visa restrictions.

Despite living in the United States since childhood and speaking perfect American-accented English, Sharapova has always retained her Russian citizenship and the country painfully followed her recent injury troubles.

Russia's tennis federation president Shamil Tarpishchev said that he was happy that Sharapova managed to overcome completely the hardships that were caused by her shoulder injury to move herself on top of the WTA rankings again.

"She has lost two years of progress following that shoulder injury, but her natural talent and strong character helped her to overcome that rocky period," Tarpishchev said.

"We pin our hopes on a successful performance at London Olympics," he added.

"First of all, she's currently in terrific form. And second, the Olympic tennis tournament will be played on grass courts. This surface suits her playing style the best way."