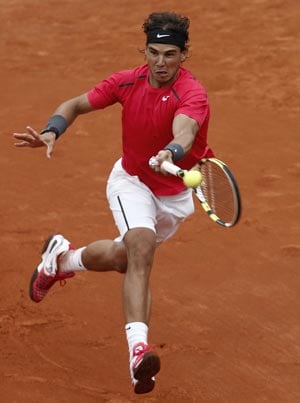 Nadal is bidding to become the first man to win seven French Open titles but faces world number one Djokovic who needs a first Paris crown to become just the third man to hold all four Grand Slams at the same time.

"The pressure is zero," said Spanish second seed Nadal, who has a 51-1 record on the claycourts of Roland Garros and has reached his seventh final for the loss of just 35 games and without dropping a set.

"I am playing well almost every day. I have to respect Djokovic as he has beaten me many times. I will fight for every ball and then we will see."

Sunday's eagerly-awaited clash could, however, be badly affected by heavy rain which is forecast to sweep across Paris, possibly pushing the final back to Monday.

"If it rains, then it rains and we play Monday," said Nadal.

"I heard there was a chance of rain, but I am thinking about playing on Sunday. If not, I will come back on Monday."