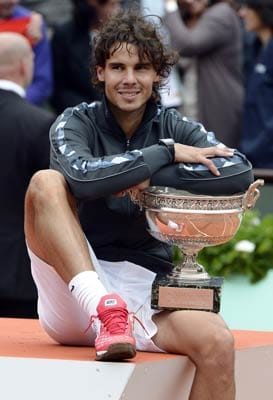 Victory took Nadal past the six Roland Garros titles he shared with Swedish legend Bjorn Borg and his career majors total to eleven.

"It is an honour and for me the most important tournament, the greatest in my eyes," said Nadal.

"This is an unforgettable moment for me, there are a lot of emotions. It was a privilege to play against one of the best players in the world."

But Nadal later admitted he had been worried about Monday's final, which had resumed with Djokovic 2-1 ahead with a break in the fourth set after Sunday's action had been stopped twice because of rain and poor playing conditions.

"I was anxious about playing. The conditions last night were not right for a Grand Slam final," he said.

"Today I wasn't ready for the match - not two hours, or even one hour before the match restarted. I only felt ready to go on court three minutes before. Only then did I feel ready to play. Before that I was too nervous."

Nadal had been a set and 5-3 ahead when play was first halted on Sunday.

On the resumption, he took the set and went 2-0 up in the third before he lost both his composure and eight straight games as Djokovic hit back to take the third set and open a 2-0 lead in the fourth.

"He played fantastic, won eight games in a row and did everything very well. I wasn't able to push him back and he was able to push me back. I was in negative positions.

"But the last game which I won for 2-1 was very important."

For five-time major winner Djokovic, the Wimbledon, US Open and Australian Open champion, Monday's defeat was the end of his dream of emulating Don Budge (1938) and Rod Laver (1962 and 1969) by holding all the four Grand Slams at once.

The Serb, who now turns his attention to defending his Wimbledon title in two weeks' time, said he was determined to take positives out of reaching his first Roland Garros final.

He was the first player at this year's tournament to break the Nadal serve - doing it seven times in all - but was undone by his 53 unforced errors.

But Djokovic admitted that he had been disappointed when the final was halted for a second and last time on a rain-plagued Sunday with him having taken the third set and standing 2-1 in the fourth with a break of serve.

"I started to play better in the third set. I hoped to play a fifth set. The first interruption (a set and 5-3 down in the second set) helped me. But the second break did not," he said.

"The playing conditions were not good. But it's not anybody's fault, and it's not the reason why I lost today.

"I reached the final for the first time here, so I wouldn't change anything. Everything happens for a reason."