Queen Maria Sharapova back on her throne after injury battle

It was no coincidence on Thursday that when it became certain that Maria Sharapova was back as world number one, there was general satisfaction within the WTA and in women's tennis in general. 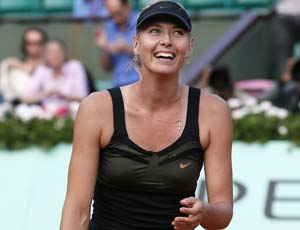 It was no coincidence on Thursday that when it became certain that Maria Sharapova was back as world number one, there was general satisfaction within the WTA and in women's tennis in general.

The Russian is unmistakenly the sport's glamour girl, it's biggest draw and, in a hugely competitive market a valuable motor and spearhead for all concerned.

More than that, she is the most recognisable sportswoman in the world and the biggest earner, rivalling even the big boys in male sport.

How she got there has been well documented over the years - from her humble beginnings in the small Siberian town of Nyagan to the Nick Bollettieri tennis academy courts in Florida.

Leaving her mother behind in Russia at the age of nine and travelling and living on the cheap with father Yuri before making her tournament debut in 2001 in an ITF event in Sarasota.

Sharapova has not forgotten those years and her roots back in Siberia.

"I'm really happy and proud of where I came from and where I was born and how it's fun to hear when they introduce me, they don't say just born in Russia, they actually say I was born in Nyagan, Siberia," she said earlier in the tournament at Roland Garros.

"Every time they say that, you can hear the crowd going, Whoa. Like I don't think people actually realize that's where I was born.

"When they say it, I always feel so proud, no matter - like when they even say I've won the Grand Slams or been number one. When they say that, I get goosebumps, because I'm so proud coming from there and getting to the position I am today."

Sharapova has always been precocious and it was at Wimbledon in 2004 as a 17-year-old that she took the tennis world by storm, and by shrieks, as she powered her way into the final and proceeded to blast her way past Serena Williams, then the dominant force in the game, for her first Grand Slam title.

A star was born from that moment on as the world became aware of the tall, beautiful blonde with a steely determination and a thunderous forehand

Sharapova immediately became an ad man's dream and her face and silhouette have since adorned many products from perfumes to clothes.

It was not quite so simple on the court.

In an age when the Williams sisters and Belgian pair Justine Henin and Kim Clijsters made it highly competitive at the top end of women's tennis, Sharapova held her own in the top five, winning her second Grand Slam title at the 2006 US Open.

She became world number one for the second time after losing to Serena Williams in the Australian Open final of 2007, a tournament she won the following year for her third Grand Slam title.

All seemed set for her to dominate, but that was when a serious right shoulder injury struck and nearly wrecked her career.

What followed was a 10-month long battle to recover, not knowing whether she would ever play competitively again.

Bit by bit she put things back together, shortening her service action to avoid the injury and the pain returning.

It was then that she began to cherish another ambition - to win the French Open title, complete a career Grand Slam and prove wrong all those who said that with her flat-hitting and suspect movement on clay, that she had no chance of winning on the surface.

On Saturday, Sharapova did just that, with her 6-3, 6-2 defeat of Italy's Sara Errani.

And with the world number one spot back in her possession, and a possible marriage to Slovenian basketball player Sasha Vujacic later this year, the world could not be a better place for her.

"It's a long road back - it's a long process," she said after regaining the world number one spot.

"It's a lot of days of frustration and uncertainly not knowing how much you want it, not knowing whether it would be a moment like that for you again.

"There are definitely a lot of tough things you have to go through to get to this point, but when you get there and you look back at the things that you did and the work that you put in and the toughest days that you can remember, it's all really worth it."

Comments
Topics mentioned in this article
Tennis Maria Sharapova Jo-Wilfried Tsonga Rafael Nadal Andy Murray Novak Djokovic Na Li French Open 2012
Get the latest updates on IPL Auction 2023 and check out  IPL 2023 and Live Cricket Score. Like us on Facebook or follow us on Twitter for more sports updates. You can also download the NDTV Cricket app for Android or iOS.