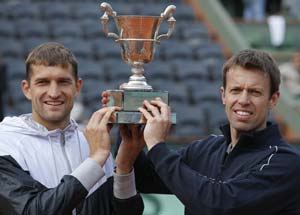 The second-seeded Bryans were bidding to win their 12th Grand Slam doubles championship. That would have set a record for most in the Open era, which began in 1968.

It's the fourth French Open title each for Mirnyi and Nestor - but the others came with other partners.