The picture she posed for at the beginning foreshadowed a mismatch in the making — 6-foot-2 Maria Sharapova standing at the net, towering over an opponent nearly 10 inches smaller than her. 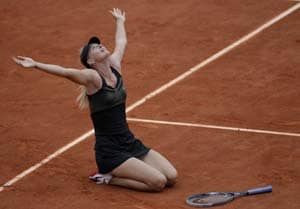 The picture she posed for at the beginning foreshadowed a mismatch in the making - 6-foot-2 Maria Sharapova standing at the net, towering over an opponent nearly 10 inches smaller than her.

The pictures that were snapped at the end told a different story - Maria Sharapova down on her knees after a tougher-than-expected win, head buried in her hands, celebrating after completing a comeback three years in the making and cementing her name among the greatest in tennis.

The Russian star won the French Open on Saturday, defeating her tiny Italian opponent, Sara Errani, 6-3, 6-2 in the final at Roland Garros to complete the career Grand Slam.

"It's been such a journey for me to get to this stage," Sharapova said. "There are so many people to thank, but most importantly, it's my wonderful team that keeps me together."

Second-seeded Sharapova, who was guaranteed of moving to No. 1 in the world regardless of the result, jumped to a quick 4-0 lead against the 21st-seeded Errani, who was in her first Grand Slam final.

But Errani battled back on a cool, blustery day in Paris, turning what had the makings of a blowout into an 89-minute endurance contest, filled with long rallies that forced Sharapova to reach back and find another gear. Eventually, Sharapova's bigger serve and bigger groundstrokes wore down Errani, who at 5-foot-41/2 stands 91/2 inches shorter than her opponent.

"She won many points with her serve or in the first two or three shots," Errani said. "It was difficult. I couldn't play long points like I wanted to play."

When Errani netted a short backhand on the third match point, Sharapova dropped gingerly to her knees and put her head in her hands, then reached back and looked heavenward - a long, hard road back to the top finally capped with the only major title that had eluded her.

"If this was my only one, it would be just as special as it is winning my fourth," she said.

Maria Sharapova won the trophy on the red clay of Roland Garros, about three years after dropping as low as 126th in the rankings after shoulder surgery that threatened her career. She rededicated herself to the game and made a special effort to improve on clay, the surface on which she moved to 18-1 in matches this year.

She added this year's French Open title to championships at Wimbledon in 2004, the U.S. Open in 2006 and the Australian Open in 2008 to become only the 10th woman to win all four major tournaments, joining players such as Chris Evert, Martina Navratilova, Serena Williams and Billie Jean King.

It was Sharapova's 27th overall career title. She'll be back at No. 1 in the WTA rankings on Monday for the first time since June 2008, though this win reminded her of a scene a few years before that.

Back in 2004, Sharapova was 17, just becoming a name on the tennis scene when she swept into Roland Garros and made a surprise trip to the quarterfinals. A preview of things to come: A month later, she won Wimbledon and everyone knew her name.

"It took me many years to get to this stage," she said. "Eight years ago, it was my first breakthrough Grand Slam. I made it to the quarterfinals, and eight years from that day, I'm here on this stage. I'm so happy to share this moment."

The lopsided score in the final wasn't all that unexpected, given the size, experience and power advantage Sharapova brought to the first meeting between the two. But really, the score didn't tell the whole story.

Errani, who won the doubles title on Friday and will move to the top 10 in singles for the first time on Monday, struck a victory for any athlete, from the pros to the playground, who ever walked onto a court or field, looked up at an opponent towering over them by a foot and said, "Hey, maybe I can do this."

Despite spinning serves in at 70-80 mph, while Sharapova was topping out in the 115 mph range, Errani played Sharapova toe-to-toe for the better part of the hour and a half, especially after she overcame the jitters in the shaky opening games.

Eventually, Sharapova's power game won out but Errani fought to the bitter end - showing the savvy to hit two drop shots that won points in the final game, each of them sending Sharapova scrambling towards the net, only to arrive a split second late.

Still, Sharapova finished the match with 25 winners from the baseline compared to four for Errani, while committing 29 unforced errors to 11 for her opponent. Sharapova also led in aces, 6-0, including one that set up the third and final match point.