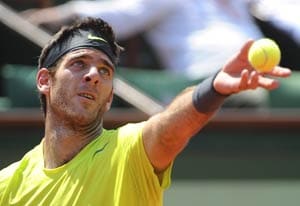 He will tackle France's Edouard Roger-Vasselin for a place in the last 32.

Del Potro, a potential quarter-final opponent of Roger Federer, had beaten Montanes in straight sets on his way to the Estoril title in April.

But he endured a bumpy ride on Philippe Chatrier Court on Sunday when his troublesome left knee, which had already been taped, required further strapping at the end of the marathon second set.

The 23-year-old, the only man outside of Novak Djokovic, Rafael Nadal and Federer to win a Grand Slam title in the last seven years, also needed a doctor three games into the second set as the soaring temperatures threatened to take their toll.

"I was struggling a little, but I had some good treatment which allowed me to finish the match," said Del Potro.

"Roland Garros is a physically-demanding tournament. I have to keep that in mind as I am playing well at the moment."

US Open champion Samantha Stosur had the honour of being the first player into the second round, brushing aside Britain's Elena Baltacha in her opener.

Australian sixth seed Stosur, the 2010 runner-up to Francesca Schiavone, took just over an hour to see off the 68th-ranked Baltacha 6-4, 6-0 on Philippe Chatrier court.

The 26-year-old from the Gold Coast, who hammered 23 winners to Baltacha's eight, next faces Irina Falconi of the United States.

Stosur, who also kicked-off the 2011 tournament, said she was getting used to the French Open Sunday starts which were introduced in 2006.

"But now with a full schedule, it really feels like the first day of the event."

Joining Stosur in the next round was Russia's Svetlana Kuznetsova.

The 26-year-old Russian, who was also runner-up in 2006, brushed aside the 30-year-old Florida-based Lucic in just 61 minutes.

Kuznetsova, also the 2004 US Open champion, next tackles either Kateryna Bondarenko of Ukraine or Taiwan qualifier Chan Yung-Jan.

Despite Baltacha's defeat to Stosur, British hopes were boosted when Laura Robson, who had lost in qualifying, was handed a spot in the main draw as a 'lucky loser' after Spains's Silvia Soler-Espinosa pulled out with an injury.

Robson joined fellow qualifier Heather Watson, Baltacha and Anne Keothavong in the main draw, making it the most British women in the first round in Paris for 21 years.

With drawcards such as Djokovic, Nadal, Federer, Maria Sharapova and Serena Williams all spared opening day duty, the likes of Venus Williams and top French man Jo-Wilfried Tsonga get a chance to impress later Sunday.

Williams, now ranked 53 in the world after battling energy-sapping Sjogren's Syndrome, was runner-up in Paris in 2002, losing the final to sister Serena.

Tsonga, who sparked controversy on the eve of the tournament, by claiming that French players had no chance of winning their home Grand Slam, takes on Russian qualifier Andrey Kuznetsov, the world 159.