It's just routine for king of clay Rafael Nadal 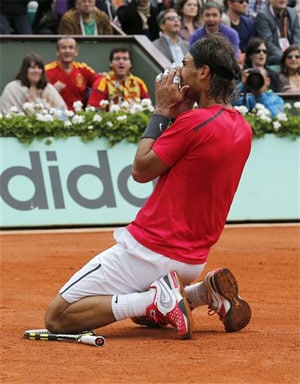 The Spaniard made it a record seven on Monday with a 6-4, 6-3, 2-6, 7-5 win over world number one Novak Djokovic, ending the Serb's hopes of becoming only the third man to hold all four Grand Slam titles at the same time.

But Nadal is a reluctant superstar whose idea of a late night is being pictured after 10pm watching his beloved Real Madrid.

He says "please" and '"thank-you" to ballboys and ballgirls and when he's not hammering the life out of tennis balls and squeezing the spirit out of opponents, he's happiest on the golf course or fishing with friends at his Spanish home on Manacor.

Victory on Monday took him beyond the six Roland Garros titles of Swedish legend Bjorn Borg and onto 11 Grand Slam crowns in total, one behind Roy Emerson, three off the 14 of Pete Sampras and five from Roger Federer's record of 16.

Not that the 26-year-old will be shouting it from the rooftops.

"I have much more than I ever dreamed," said Nadal, whose win under gloomy Paris skies boosted his career earnings to a very sunny $50 million.

Maybe, but most men of his age can indeed only dream of appearing in a steamy pop video with Shakira as his did in 2010.

But it was another uncle, Toni, who has overseen his career, who introduced him to tennis when he was three.

He made his professional debut in September, 2001, as a 15-year-old, losing his first match in Madrid but winning his first a week later in Seville.

His first win on the ATP Tour came in Mallorca the following year, two months short of his 16th birthday.

By 2003, the world was taking notice when Nadal went through qualifying at the prestigious Monte Carlo Masters and reached the third round.

He has since won the title on the Riviera eight times.

By 2004, he was the youngest player to feature in a Davis Cup winning team and in 2005, he became the first man since Mats Wilander in 1982 to clinch the French Open on his debut.

Nadal has suffered a few bumps along the way.

His defeat to Robin Soderling at the French Open in 2009 -- his only loss at Roland Garros in 53 matches -- came at a time when his long battle with knee injuries threatened to overwhelm him.

His parents Ana Maria and Sebastian also separated at that time and Nadal's misery was compounded when he had to tearfully withdraw from Wimbledon where he had been defending champion.

Nadal was being written off then, as he was in 2011 and into January this year when he lost seven finals in succession to Djokovic, three of them at Grand Slams.

The last of those was in Australia where the Serb clinched a six-hour marathon, the longest final in a major of all time.

But Nadal, fit again and with the bandages long removed from his troublesome left knee, swept through the claycourt season at Monte Carlo, Barcelona and Rome before clubbing his way into the record books on Monday.