Maria Sharapova said her French Open triumph was a greater achievement than her teenage 2004 Wimbledon breakthrough which launched her on the road to international fame and fortune. 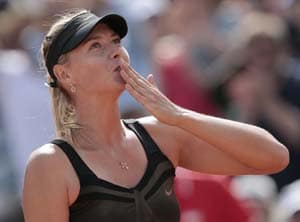 Maria Sharapova said her French Open triumph was a greater achievement than her teenage 2004 Wimbledon breakthrough which launched her on the road to international fame and fortune.

The Russian, one of the few genuine stars in the women's game, completed a career Grand Slam by beating Italy's Sara Errani 6-3, 6-2 on Saturday.

It was the 25-year-old's first Roland Garros title and fourth major of her career, but first since she recovered from a potentially career-ending shoulder injury.

"It's the most unique, surreal moment. I never thought I would have it. When I won Wimbledon at 17, I thought that would be the most cherished moment of my career," she said.

"But when I fell to me knees today on the court I realised that winning here was extremely special, even more so."

Sharapova added the 2006 US Open and 2008 Australian Open titles to her 2004 win at Wimbledon before the shoulder injury sidelined her for 10 months, sending her ranking spiralling to 126 in the world.

She has endured numerous false starts since that time and losses in the 2011 Wimbledon final to Petra Kvitova and this year's Australian Open title match at the hands of Victoria Azarenka led many to ponder whether she had been overtaken by a new generation of big-hitters.

But titles on clay in Stuttgart and Rome in the run-up to Paris transformed her into one of the favourites for the Paris title which she achieved with a 6-3, 6-2 win over the out-gunned Errani in just 90 minutes.

With the Williams sisters on the wane, Kim Clijsters about to retire and the likes of Azarenka and Caroline Wozniacki struggling for consistent levels of success, Sharapova believes there are many more majors coming her way.

"It's been a long journey, I started from such a young age, but I'm not done yet, far from it," she said.

"I have a lot more to achieve, I always believed in my game and that I could get better on grass, clay, cement."

Sharapova said she was increasingly motivated by the people who wrote her off, never doubting her own powers or the influence of those around her.

"No matter how tough it was or if people didn't believe in me, I never listened. I only listened to my own voice which told me that I would succeed again and I did.

"No matter how many punches I took, I didn't care. I always got back up again. There were no excuses. I love this work of playing tennis. I could have said I have had enough when I was injured.

"I could have said I have enough money and fame, but when your love for the sport is bigger than those things, then you still get up to practice when it's freezing or when others have no belief."