Andy Murray overcame crippling back pain to battle his way past Jarkko Nieminen into the third round of the French Open on Thursday. 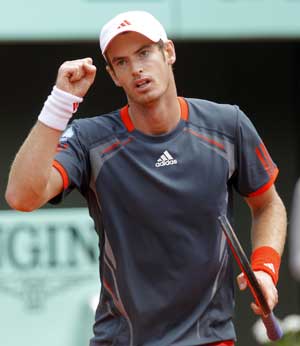 Andy Murray overcame crippling back pain to battle his way past Jarkko Nieminen into the third round of the French Open on Thursday.

The British fourth seed defeated the Finn 1-6, 6-4, 6-1, 6-2 but he had looked down and out in the first few games of the match as the lower back strain that he has been struggling with all year struck again.

But at a set and 4-2 down, Murray suddenly found a new lease of life and a run of seven games in a row in his favour gave him command.

"It was tough, I was obviously struggling at lot particularly at the beginning of the match. He helped out a little bit and got nervous at the end of the second set. I don't know how I won to be honest," he told the BBC.

"I think my back went into spasm. It was sore this morning when I got up and practiced and it was sore 20 minutes after I finished practice.

"The guys were telling me to stop after the first set, we talked about it briefly before the match and I just decided to play. Sometimes guys can get nervous and you feel better, and a combination helped me get through.

"It's not easy playing against someone that's struggling and sometimes guys stop or try finishing the match. I managed to turn it around and it was tough for him."

In what was the first match up on the Philippe Chatrier centre court, Murray looked stiff and concerned from the start as the unseeded Niemenen jumped out into a 3-0 lead.

The Scot then looked in distinct pain in his next service game, barely getting his serve over the net and staying rooted to the spot in the brief exchanges.

He called for medical help to ease the discomfort in his lower back at the turnover and resumed play.

Against the odds he managed to get one of the breaks back but following further treatment he again served at half pace to fall 5-1 down.

Niemenen wrapped up the set 6-1 after which the doctor came on once again to administer stretching exercises to a prone Murray.

It looked a matter of time before Murray called it a day, but instead he battled on and gradually, as the pain eased, he started to find his movement and with that his firepower.

The Murray serve was still well short of full power, but he opened the third set with another love game as Nieminen struggled to blunt the Scot's stunning revival.

Murray moved 3-0 up before Nieminen stopped the rot, but the die was cast and the fourth seed accelerated away to keep alive his hopes of reaching the semi-finals of a Grand Slam tournament for the sixth straight time.