It was Sebastian Vettel's 48th win in his 200th grand prix and follows his earlier wins in Melbourne in 2011 for Red Bull and last year for Ferrari. 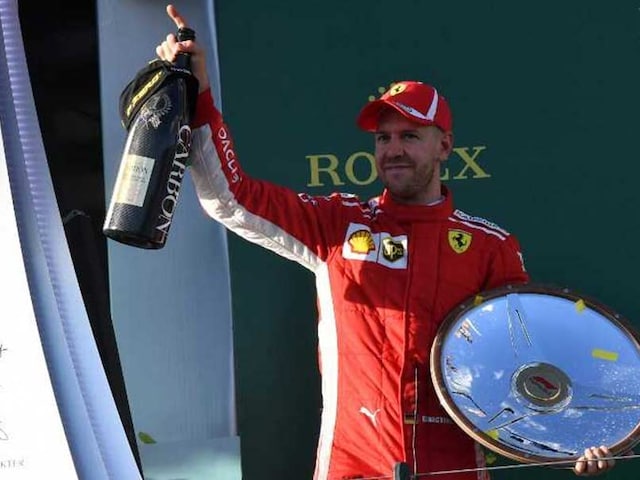 Sebastian Vettel got the jump on Lewis Hamilton off a miscalculation on the pit stop.© AFP

Sebastian Vettel won a thrilling duel with world champion Lewis Hamilton to steal the season-opening Australian Formula One Grand Prix in Melbourne on Sunday. The four-time world champion got the jump on the Mercedes ace off a miscalculation on the pit stop under Virtual Safety Car conditions and held off Hamilton for his second straight win in Melbourne and third overall. Ferrari team-mate Kimi Raikkonen resisted a challenge from Australian Red Bull racer Daniel Ricciardo to take third and join Vettel on the podium.

"Obviously we were a little bit lucky today," Vettel said at the victory ceremony.

"Lewis did a great lap yesterday and deserved pole and he drove a very good race, controlling in the beginning.

"We got a bit lucky but we will take it. We're not yet where we want to be, I don't quite feel the car, but it gives us a good start, good wind and fresh motivation."

It was Vettel's 48th win in his 200th grand prix and follows his earlier wins in Melbourne in 2011 for Red Bull and last year for Ferrari.

Vettel, 30, is in a duel this season with Hamilton as they chase 1950s Argentine legend Juan Manuel Fangio's mark of five world titles -- second only to Michael Schumacher's seven in the all-time list.

Hamilton, who had started from pole position, got out his car and looked a bit bewildered as he removed his helmet, wondering how exactly that race got away from him.

"Today they did the better job. We have to go back to the drawing board and work on it," Hamilton said.

"We still have great pace and during the race I could apply pressure at the end but it is so hard to overtake here.

"At the end it was live to fight another day and save the engine."

Vettel had led after Hamilton's early tyre stop and when mid-race the German changed to a new set of soft tyres he emerged still ahead, gaining around 10 seconds in the pit lane thanks to the Mercedes driver having to slow on track once the Virtual Safety Car (VSC) had been deployed.

"What just happened guys? Was that my mistake?" a confused Hamilton said on team radio as he saw Vettel come out of the pit lane in front of him before a full safety car was sent out with marshals struggling to remove the stranded Haas of Romain Grosjean.

"We thought we were safe, but there's obviously something wrong," the team told Hamilton. Mercedes potentially miscalculated the VSC minimum speed during the phase Vettel claimed the lead.

Vettel retained his lead as the race was restarted and built a lead of seven-tenths of a second.

Alonso back in the fight

Hamilton made an error as he locked up at turn nine and fell 2.8 seconds behind Vettel with 11 laps remaining.

Vettel proved too resilient and held on as Hamilton backed off over the final laps realising he could not pass the flying German.

Team-mate Raikkonen, bidding for his third win in Australia, kept Ricciardo and Red Bull off the podium.

"It was OK. We didn't have the most luck but what can you do," he said.

"Luckily it was Seb who got the luck and it was our team at least. I think I had decent speed all day long, it's just difficult to pass."

"Well done guys, very proud of you. Long winter, long seasons in the past but now we can fight, we can fight," Alonso said over the team radio.

Comments
Topics mentioned in this article
Mercedes Ferrari Sebastian Vettel Lewis Hamilton
Get the latest updates on IPL 2020, check out the IPL Schedule for 2020 and Indian Premier League (IPL) Cricket live score . Like us on Facebook or follow us on Twitter for more sports updates. You can also download the NDTV Cricket app for Android or iOS.