Not only is Zlatan Ibrahimovic blazing his own trail on the field but he is doing so off it as well. 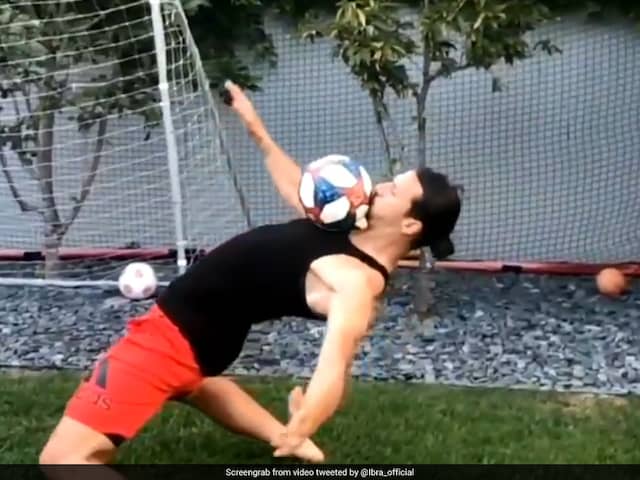 Zlatan Ibrahimovic aced the 'Matrix Challenge' while balancing the ball on his chest.© Twitter

Zlatan Ibrahimovic is blowing his opponents away as he continues to grab headlines in Major League Soccer (MLS) for the LA Galaxy. On Wednesday, the veteran Swedish striker found the back of the net again, helping the LA Galaxy secure a playoff spot with a 2-1 win over Real Salt Lake. Not only is Zlatan Ibrahimovic blazing his own trail on the field but he is doing so off it as well. On Friday, the former Manchester United and Barcelona forward posted a video of him mimicking Keanu Reeves' iconic scene from the blockbuster movie 'The Matrix'. In the video, Zlatan shows he has all the flexibility of 'Neo', recreating the scene with the ball on his chest.

In the movie, 'Neo', played by Keanu Reeves, dodges bullets in slow motion, which is what participants aim to copy in the 'The Matrix Challenge'.

Ibrahimovic manages to pull off the scene while perfectly balancing the ball on his chest and rotating his arms.

Not only is the 37-year-old veteran footballer wowing fans on social media but has also been giving LA Galaxy supporters a reason to celebrate.

Vela scored in LAFC's 3-1 win over Houston on Wednesday.

The Galaxy now have 51 points and move to third in the Western Conference with the victory, which sealed their first playoff spot since 2016.

They have won three straight for the first time since winning five in a row during March and April.

Novak Djokovic Football
Get the latest Cricket news, check out the India cricket schedule, Cricket live score . Like us on Facebook or follow us on Twitter for more sports updates. You can also download the NDTV Cricket app for Android or iOS.