World Cup Qualifiers: Ousmane Dembele scored the opening goal as holders France beat Kazakhstan 2-0 away on Sunday to claim the first victory in their campaign to qualify for the 2022 World Cup in Qatar. 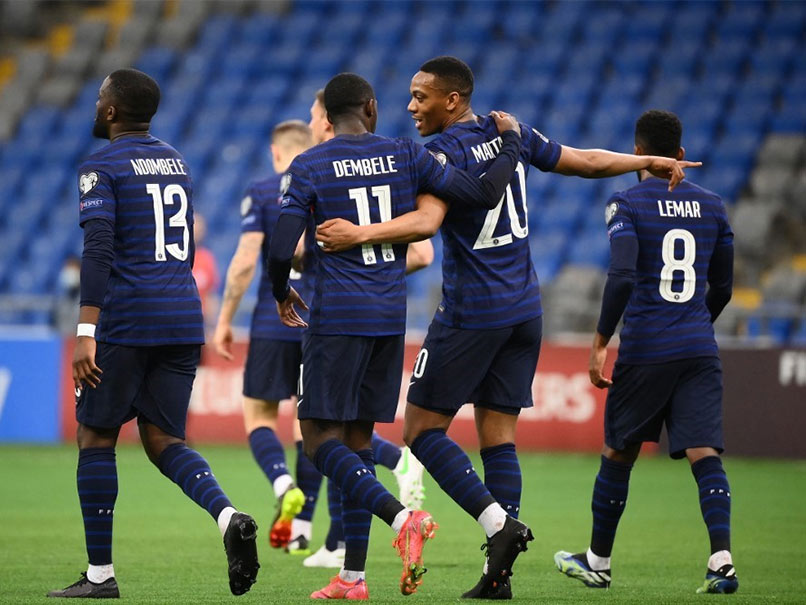 Ousmane Dembelescored the opening goal as holders Francebeat Kazakhstan 2-0 away on Sunday to claim the first victory in their campaign to qualify for the 2022 World Cup in Qatar. Sergei Maliy put through his own net for France's second goal before half-time but Kylian Mbappehad a second-half penalty saved after coming off the bench.

It was a welcome result for the reigning world champions after they kicked off their campaign in qualifying Group D by drawing 1-1 at home to Ukraine last Wednesday.

"We said beforehand that it was all about getting the job done and it's a positive result against a team who never gave up," Paul Pogba, who returned to the starting line-up, told broadcaster TF1.

Didier Deschamps' side now stop off in Sarajevo for another match against Bosnia and Herzegovina on Wednesday to complete a hectic start to qualifying before reverting their focus to the delayed Euro 2020 in June.

In an attempt to keep his squad fresh, Deschamps made nine changes to his line-up following the Ukraine draw for the match in Nur-Sultan, more than 5,000 kilometres east of Paris in Central Asia.

Antoine Griezmann, who scored France's goal against Ukraine, was the only outfield player to keep his place in the side, while Hugo Lloris again started in goal as he won his 122nd cap.

Griezmann's Barcelona teammate Dembele was one of those brought into the team as he started for France in a competitive game for the first time since the triumphant 2018 World Cup campaign in Russia.

It was Dembele who got the breakthrough in the 20th minute, controlling on the edge of the box and scoring with a low drive into the corner of the net after good work by Anthony Martial to set him up.

"He's always had the technical ability and he scored a great goal," Deschamps said of Dembele.

"There are always things he can do better. He can still be more decisive, but when he plays like he did today he is good to watch."

France scored their second goal a minute before half-time when defender Maliy headed a Griezmann corner into his own net as he tried to hold off Pogba.

That effectively ended any doubt about the outcome of the contest with Kazakhstan, ranked 122nd in the world and who failed to win a single game in 2018 World Cup qualifying, struggling to create any chances at the other end.

Manchester Unitedforward Martial took a knock and was eventually replaced just before the hour mark by Mbappe, who had several chances to add to France's lead.

The best opportunity for the Paris Saint-Germain star came from the spot in the 75th minute after he had been brought down by Nuraly Alip.

However, Mbappe's kick was turned around the post by home goalkeeper Aleksandr Mokin.

France Ousmane Dembele Kylian Mbappe Football
Get the latest updates on T20 World Cup, check out the T20 World Cup Schedule and Live Score . Like us on Facebook or follow us on Twitter for more sports updates. You can also download the NDTV Cricket app for Android or iOS.