Xavi made his first team debut for Barca when he was just an 18-year-old, but since then his passing ability has developed into an artform and he, more than anyone, can be seen as the architect of the football that made Barcelona the top club in Europe and has made Spain both World and European Champions. 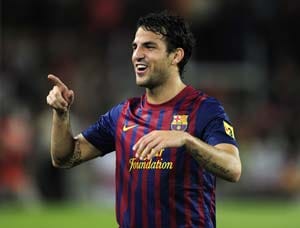 Fabregas was involved in all three of Barca's goals as they moved four points clear of Atletico Madrid in second place with a convincing 3-0 win over Celta Vigo on Tuesday.

The Spanish champions have racked up five straight league wins, as well as beating Ajax 4-0 in their Champions League opener and regaining the Spanish Super Cup with an away goals victory over Atletico Madrid.

FC Barcelona's Jordi Alba out for 3 weeks with leg injury

The injury will rule Jordi Alba out of Barcelona's Champions League opener at home against Ajax on Wednesday and its second group phase match at Celtic on Oct. 1.

After joining from Lyon in 2007, Abidal played 125 league games for Barcelona, helping the Catalan club to win four league titles and two European Cups. He forged a close bond with former coach Pep Guardiola, who is now in charge of Bayern Munich.

Gerardo Martino had handed a first start to Neymar as the Brazilian and Lionel Messi lined up for the first time in a competitive match since the former's switch from Santos.

Messi has now played the 90 minutes in just one of Barcelona and Argentina's last 27 matches stretching back to when he initially picked up a hamstring strain against Paris Saint-Germain in April.

As much as the Argentine is often lauded for not being the stereotypical egotistical modern footballer, the success that both player and club have had in recent years has very much depended on building the side around Lionel Messi's talents.

The 26-year-old, who was courted by Manchester United this summer before opting to remain at the Nou Camp, will miss Spain's midweek friendly against Ecuador but could also skip the start of the new season next weekend.

The 26-year-old Fabregas, who has been pursued by Manchester United this summer, scored one goal and set up the other two in the match.

With World Player of the Year Lionel Messi on the bench over injury concerns, Brazilian wonderkid Neymar was the star of a tight first half, showcasing his talents to make one goal and score another for FC Barcelona.

The Spanish club said in a statement on their website that they "could not compromise the well being of our players".

Even as Neymar opened his Barcelona account, Lionel Messi too scored a brace. Barcelona are the fourth big name side to travel to Bangkok this summer hot on the heels of English Premier League giants Manchester United, Chelsea and Liverpool who have all toured the kingdom.

Barcelona told The Associated Press that "due to an operation on his tonsils this summer the player is suffering a case of anemia that is being treated and won't impede him from training with normality with the rest of his teammates." The club did not specify what treatment Neymar is following.

What the match did teach, however, is that new coach, Gerardo 'Tata' Martino is not going to change the 4-3-3 line up which has worked so well for Barca in recent seasons. Sergio Busquets will still be the midfield lynchpin with Xavi Hernandez and Andres Iniesta creating some magic and moving the ball in front of him.

The 22-year-old completed his transfer from Barcelona to Munich on Monday, having signed a four-year deal with an initial fee of 20 million euros ($26 million), plus an extra five million euros from a future friendly between Bayern and Barcelona.

British media reported on Monday that United had made an offer worth 29 million euros ($38 million) for Fabregas.