Sunil Chhetri had scored his 50th goal for Bengaluru FC in the previous season. 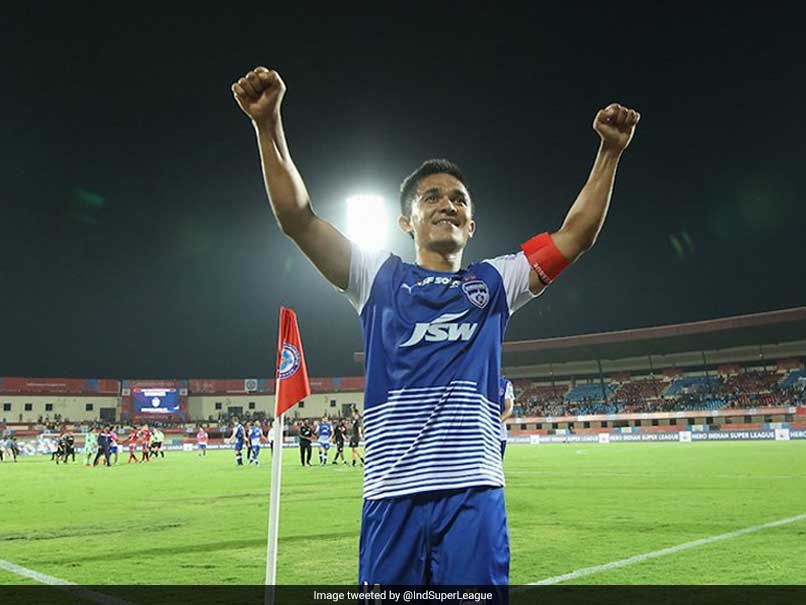 Sunil Chhetri had earlier signed a three-year deal with the Blues.© Twitter

Bengaluru FC skipper Sunil Chhetri -- who was recently awarded the AIFF player of the year, on Tuesday put pen to paper to extend one-year contract with the Indian Super League (ISL) club, the southern outfit announced on Tuesday. The talisman, who scored his 50th goal for ISL debutants Bengaluru FC in the previous season will be a part of the JSW Group-owned side until the end of the 2020-2021 season with an option to extend the contract. Chhetri had earlier signed a three-year deal with the Blues ahead of their move to the ISL last season. He is also the longest serving player at the club and spoke of his delight at the extension.

"I have always said that this club and these fans have been the most fantastic experience of my life and signing a new deal here is only a way of giving back to a club that has given so much to me. I've made some fantastic memories here and I believe there are many more to make," he said.

Having won the club's 'Top Scorer of the Year' award for five consecutive seasons, Chhetri is Bengaluru's highest goal scorer, with 71 goals in 144 appearances.

"It's special to have Sunil Chhetri play for us. He is, by far, the fittest player around and he has proven so many times that age is just a number," said Parth Jindal, CEO of Bengaluru FC.

"For us, the club was built around Sunil and continues to do so. We hope he stays for as long as possible at BFC in the capacity of a player and beyond," he added.

Bengaluru FC are currently in pre-season training at their residential facilities in Bellary, following which they will fly out to Spain for a pre-season camp.

The Blues' first competitive match of the season kicks off in less than a month, when they take on Turkmenistan's Altyn Asyr FK in a two-legged Inter-Zone semi-final of the AFC Cup, on August 22 and 29.

Bengaluru FC Sunil Chhetri Football
Get the latest updates on ICC T20 Worldcup 2022 and CWG 2022 check out the Schedule, Live Score and Medals Tally. Like us on Facebook or follow us on Twitter for more sports updates. You can also download the NDTV Cricket app for Android or iOS.