Inter Milan, bidding for a first Scudetto since winning the treble under Jose Mourinho in 2010, are now one point clear of AC Milan, with Roma six points further back in third. 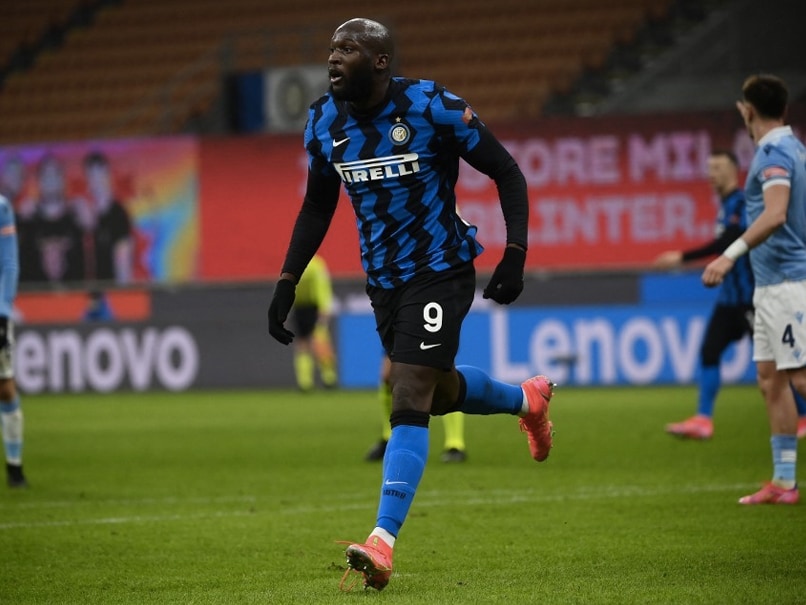 Romelu Lukaku scored twice to reach 300 career goals as Inter Milan moved above AC Milan to the top of Serie A with an impressive 3-1 home win over Lazio on Sunday. Lukaku's brace came in the first half as Inter Milan made the most of their city rivals' surprising 2-0 loss at Spezia on Saturday. Inter, bidding for a first Scudetto since winning the treble under Jose Mourinho in 2010, are now one point clear of AC Milan, with Roma six points further back in third. The stage is set for a mouthwatering Milan derby at the San Siro next Sunday.

"He (Lukaku) came back firing on all cylinders tonight and we need this Romelu. We need this determination and passion from everyone in the team," Inter coach Antonio Conte said.

"I am happy for the lads, inevitably this must be a starting point for us and not the finish line. We know the next game is the derby with Milan, going into it above them is obviously much better.

"It's going to be a fascinating game between two teams who have strong ambitions."

Conte apologised on Saturday for appearing to show the finger to his former club's directors at half-time of the controversial Italian Cup match at Juventus on Tuesday.

At the San Siro, Lukaku opened the scoring on 22 minutes from the penalty spot after Wesley Hoedt fouled Lautaro Martinez.

The Belgium forward then moved level with Cristiano Ronaldo at the top of the Serie A goalscoring charts just before the break, as he hit a loose ball first time on the half-volley for his 16th league goal of the campaign.

The deficit was halved just after the hour mark as Gonzalo Escalante's free-kick was deflected to leave Inter goalkeeper Samir Handanovic flat-footed.

But Inter's return to the summit was secured in the 64th minute as Lukaku turned the provider for Martinez.

A move which started at the edge of the home box and continued with Lukaku's powerful run from the halfway line ended with Martinez side-footing in his 11th effort of the season.

Atalanta moved up to seventh, level on points with fifth-placed Napoli, after Luis Muriel scored in the 90th minute to earn a 1-0 victory at Cagliari.

One week after losing to Juve, Roma took advantage of the champions' loss to Napoli

Roma continued their strong form at the Stadio Olimpico even without Edin Dzeko, who returned from his brief exile when he came on for the last 21 minutes. They are the only team in Serie A still unbeaten at home this season.

Veretout put Roma ahead after five minutes, racing forward to meet a cross from Gianluca Mancini with a powerful header.

It was Veretout's fourth succesful penalty and ninth league goal of the season.

With 15 league goals (and 17 in all competitions) since his arrival in Rome from Fiorentina in 2019, the former Aston Villa and Nantes player has overtaken Vincent Candela as Roma's top-scoring French player.

Veretout said he had been told to get into the opposing penalty area more often by coach Paulo Fonseca.

"I have challenged him on the number of goals he scores," said Fonseca. "I told him that he had to score more than ten."

In Cagliari, Atalanta were frustrated for 90 minutes by the relegation-haunted hosts before the game sprung to life in the dying seconds.

Atalanta looked heavy legged four days after beating Napoli in the Italian Cup semi-finals but their bench made the difference. Muriel, who came on in the 68th minute, beat two defenders on the edge of the box before drilling home the winner in the 90th minute.

"It was a very difficult match from the start, I'm happy to have scored. Winning like that means a lot," said Muriel.

Romelu Lukaku Football
Get the latest updates on ICC Women's Cricket World Cup 2022 and IPL 2022, check out the Schedule , Live Score and IPL Points Table. Like us on Facebook or follow us on Twitter for more sports updates. You can also download the NDTV Cricket app for Android or iOS.