Juventus held Inter Milan to a goalless draw after a 2-1 win in the first leg to reach the Italian Cup final. 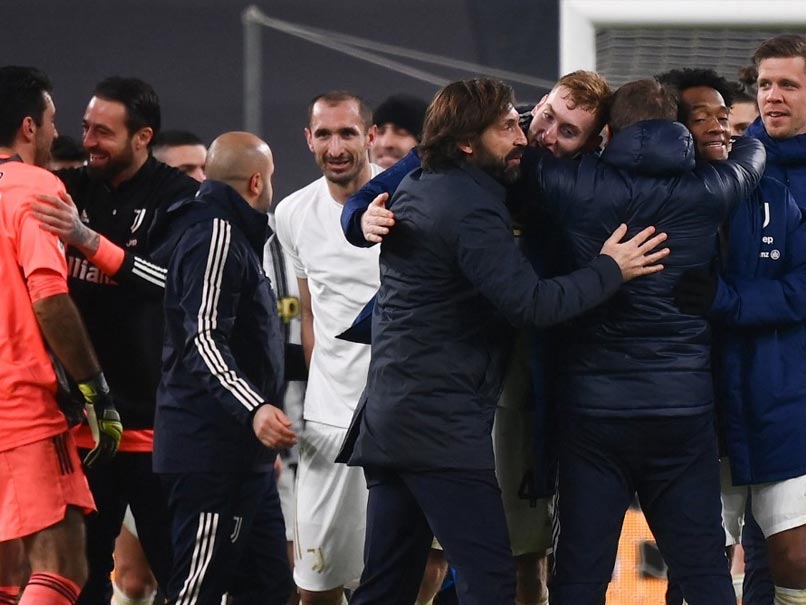 Juventus manager Andrea Pirlo celebrates with his team after qualifying for the Italian Cup final.© AFP

Juventus are in the final of the Italian Cup after a goalless draw with rivals Inter Milan on Tuesday put them through 2-1 on aggregate. Andrea Pirlo's side will face one of Napoli or Atalanta, who are locked at 0-0 ahead of Wednesday's second leg in Bergamo, in May's final in Rome after comfortably holding Inter in a disciplined display at the Allianz Stadium. Inter barely troubled veteran Juve goalkeeper Gianluigi Buffon despite the return of Romelu Lukaku and Achraf Hakimi, while Cristiano Ronaldo was twice denied by fine Samir Handanovic saves at the other end.

Juve are unbeaten since losing 2-0 to Inter in Serie A last month as novice coach Pirlo drags his team into contention in league and cup after an uncertain start coaching the Italian champions.

They have conceded just once since that defeat, in the first leg win at the San Siro last week, and look in ominous form as they return to the title chase at the weekend.

Juve sit seven points behind leaders AC Milan with a game in hand and a trip to troubled Napoli awaiting them on Saturday.

"It's a completely different feeling as a coach, we're really happy but we haven't done anything yet," said Pirlo to state broadcaster Rai.

"We were really good today, they basically didn't have a shot on goal. Handanovic was the best player on the pitch," added the 41-year-old, who won four league titles as a Juve player.

Antonio Conte, who led Pirlo to three of those Serie A crowns, will now have to concentrate entirely on overhauling Milan if he wants to win Inter their first trophy since 2011.

Second-placed Inter are two points behind their city rivals ahead of their league clash with in-form Lazio on Sunday, while Milan travel to lowly Spezia.

Inter came into the match with a dismal recent record at Juventus, without a win since November 2012 when Conte was still managing the then-resurgent 'Old Lady' of Italian football.

That win, 3-1 thanks to a brace from 2010 treble hero Diego Milito, ended a 49-match winning streak for Juve but no such heroics were on display on Tuesday night.

The return of Lukaku and Hakimi, who both missed the first leg through suspension, did nothing to improve Inter's fortunes in a blunt display from the away side, who had plenty of the ball but did very little with it.

A first half of few chances featured a Juve team much-changed from the XI which beat Roma 2-0 at the weekend but equally comfortable holding their opponents at bay.

Juve were content to sit on their first-leg lead, knowing that even a 1-0 defeat would have been enough for them to go through.

Ronaldo came close to scoring first in the 64th minute when Weston McKennie pounced on sloppy play from Inter to put the Portugal captain through on goal.

However Handanovic was quick off his line and pulled off a fine save to deny Ronaldo, who turned 36 last week.

Ronaldo was again denied by Handanovic five minutes later when he skipped past Milan Skriniar and Nicolo Barella and let rip with a powerful shot which the Slovene stopper did well to push away.

Inter continued to push but the wall put up in front of Buffon held and Pirlo will have a chance to win his first trophy as a coach in debut season on the bench.