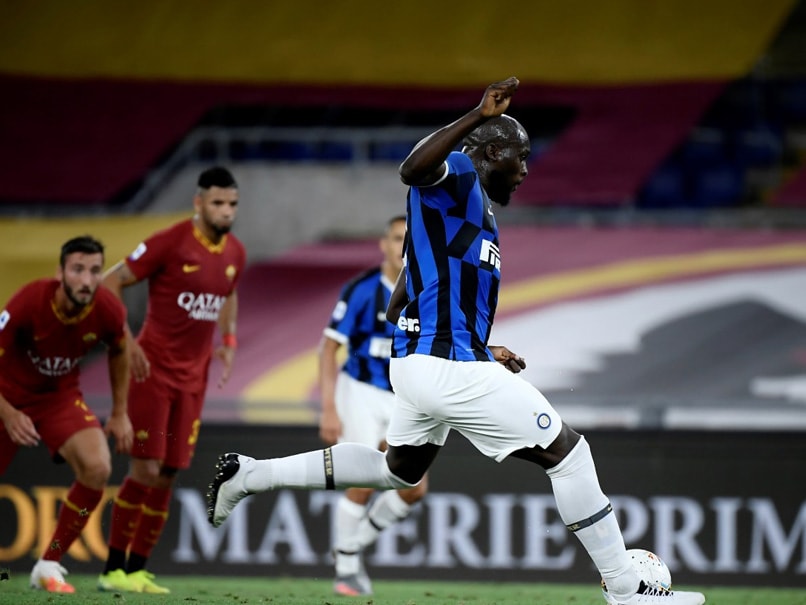 Romelu Lukaku rescued a late draw for Inter Milan as he scored from the spot.© AFP

Inter Milan missed a chance to keep the pressure on Juventus after being held 2-2 at Roma on Sunday, leaving the way clear for the Turin giants to close in on a ninth consecutive Serie A title. Romelu Lukaku's penalty two minutes from time rescued a point for Antonio Conte's Inter, who are second, five points behind Juventus.

Juve can open up an eight-point lead on the top of the table when they host fourth-placed Lazio on Monday.

Stefan De Vrij had got Inter off the mark at the Stadio Olimpico when he headed home an Alexis Sanchez corner after 14 minutes.

But Roma captain Edin Dzeko set up Leonardo Spinazzola for the equaliser in first half stoppage time and was again involved when Henrikh Mkhitaryan got the second in the 57th minute.

Lukaku came off the bench and scored from the spot late after Spinazzola fouled Victor Moses.

It was a stalemate which does little to help either team, and boosts Juventus' chances of extending their record Serie Arun.

"We have to get used to playing these big games with so much pressure, which is something Inter have lost in recent years," said Conte, whose side have not won Serie A since 2010, when they won the treble under Jose Mourinho.

"I can't blame my players for anything, today we faced a team in good shape," he continued.

"Our team is doing excellent things. Beyond the second place, we are into the Champions League."

Inter cannot be caught by Roma, who are fifth and nine points adrift of the Champions League places, 14 behind Inter with four matches to play.

They are one point ahead of third-placed Atalanta, who have also qualified for Europe's top competition after Inter's draw in the Italian capital.

Napolicoach Gennaro Gattuso was unhappy with the league's tight schedule as his side beat Udinese 2-1.

Napoli are two points behind Roma in sixth after Matteo Politano blasted in the winner five minutes into injury time to snatch all three points.

"It was an important victory even if now we're playing another sport which worries me," said Gattuso.

"This is not football. Playing every three days and without fans is something different, the players are not robots."

Gattuso's side are out of the running for the Champions League next season but are preparing to meet Barcelona in the second leg of their last 16 tie in this year's edition, with both sides locked at 1-1.

SPAL return to Serie B

At the bottom of the table Brescia, in 19th, won 2-1 to condemn SPAL to a return to Serie B after two seasons in the top flight.

In another relegation dogfight Genoa beat Lecce 2-1 to move four points clear of the southerners who occupy the final relegation spot.

Genoa are four points behind Torino, who lost 2-0 at Fiorentina.

City rivals Sampdoria are on the brink of securing Serie A survival after staging a thrilling comeback from two goals down to win 3-2 at Parma.

Fabio Quagliarella scored one and set up Federico Bonazzoli for the winner as Claudio Ranieri's side won a third consecutive match for the first time this season.

Ranieri, who memorably guided outsiders Leicester City to the 2016 English Premier League title, took over last October with the club sitting bottom of the table.

But they have come back strong after the coronavirus lockdown, winning five of their last six games and are 12 points above the drop zone with four games left.

Parma were two goals ahead at half-time thanks to Gervinho and an own goal from Samp goalkeeper Bartosz Bereszynski.

But Julian Chabot pulled one back with his head two minutes after the break before Fabio Quagliarella curled in his 11th of the season with 21 minutes and teed up Federico Bonazzoli for the winner with 12 minutes to go.

Sampdoria move ahead of Parma into 12th position as Roberto D'Aversa's side, who had been targeting the Europa League places earlier this season, slump to their sixth defeat in seven games.

Romelu Lukaku Football
Get the latest updates on Fifa Worldcup 2022 and check out  Fifa World Cup Schedule, Stats and Live Cricket Score. Like us on Facebook or follow us on Twitter for more sports updates. You can also download the NDTV Cricket app for Android or iOS.