Quique Setien said on Saturday he does not feel undermined by Lionel Messi's damning review of Barcelona's season and insists they can still win the Champions League. 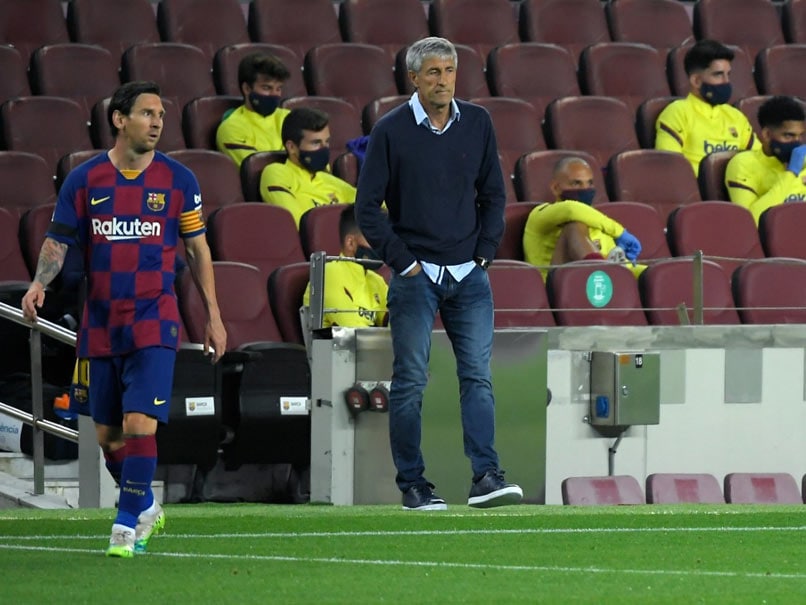 Quique Setien said on Saturday he does not feel undermined by Lionel Messi's damning review of Barcelona's season and insists they can still win the Champions League. Barca surrendered the La Liga title to Real Madridon Thursday by losing at home to Osasuna and after the match, Messi vented his frustration, saying the team has been "weak", "inconsistent" and "lacking in desire".

Messi added that unless there was "a lot of change" the team would lose to Napoli as well next month in the Champions League, comments some have taken as a shot at his coach.

But Setien maintains he has no problem with Messi's assessment.

"Not at all, I think in certain moments we all say things that can be taken badly," said Setien, ahead of Barcelona's final league game of the season on Sunday away at Alaves.

"I don't give it much importance. The feeling I get is we are absolutely aware that we have a very important competition to come and we want to reach the final and win it."

Barca face a second leg at home against Napoli in the last 16, with the tie in the balance after a 1-1 draw in the first leg.

The winner will play Bayern Munich in the quarter-finals, assuming they finish the job against Chelsea.

"We have to improve in some areas but you can't convince me everything has been a disaster, it hasn't," said Setien.

"We have to be more consistent, more reliable. If we manage to have a game like the one we played against Villarreal, where everything went well, it will undoubtedly give us a chance to win the Champions League."

Setien said he and the players held a meeting on Friday and admitted there had been disagreements.

"There are things on which we agree and other things that we don't, that's normal," he said.

"Everyone's concern is to improve the team. We are trying to find solutions so things change and that is what the meeting was all about, preparing for the future with optimism."

But Setien's position is already unstable, with failure in the Champions League likely to prompt another change after Ernesto Valverde was sacked in January.

Barcelona could finish the season without a trophy for the first time in 12 years.

Asked if he had thought about resigning, Setien said: "I always knew things were not going to be easy. At no time have I had the feeling of really wanting to leave."

Setien has named only 16 players in the squad for the game against Alaves, including three goalkeepers, meaning he can only make three outfield substitutions.

Arthur Melo, who has agreed to join Juventus next season, is unavailable after he reported an ankle injury.