AC Milan saw their lead on second-placed Inter cut to two points but hold pole position at the half-way stage of the season for the first time since they last won the title in 2011. 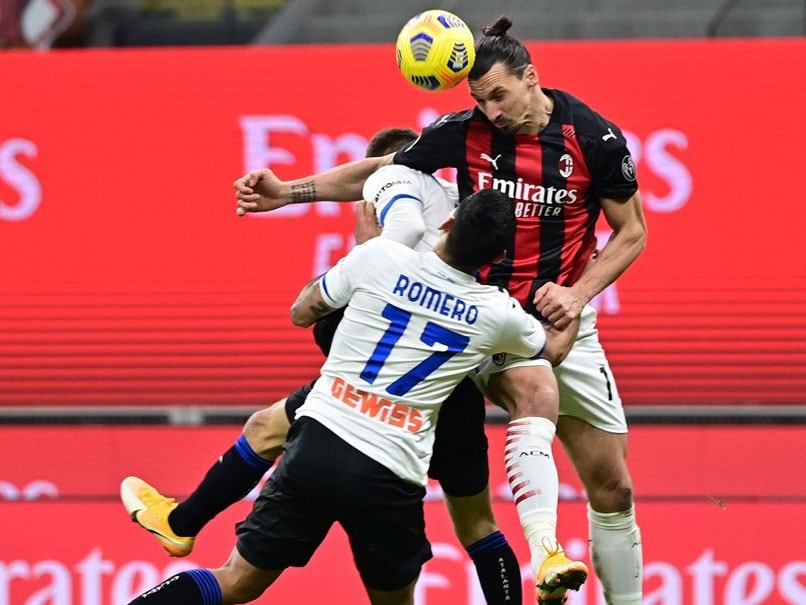 AC Milan held top spot in Serie A on Saturday despite falling 3-0 at home against Atalanta.© AFP

AC Milan held top spot in Serie A on Saturday despite falling 3-0 at home against Atalanta after nearest rivals Inter were held to a goalless draw at Udinese. Stefano Pioli's Milan saw their lead on second-placed Inter cut to two points but hold pole position at the half-way stage of the season for the first time since they last won the title in 2011. "Being winter champions means nothing to me, now we have to react," said Milan star Zlatan Ibrahimovic. "Now the difficult phase begins." Milan were outplayed at home with Atalanta's Cristian Romero heading in the first goal after 26 minutes in the San Siro.

Josip Ilicic added a second from the penalty spot eight minutes after the break after receiving a Franck Kessie elbow in the face.

Ibrahimovic missed a chance to equalise just before half time with the veteran Swede sending side.

Milan's new signing Mario Mandzukic came off the bench for the final 20 minutes but could not find the net on his debut despite testing Atalanta keeper Pierluigi Gollini.

Colombian striker Duvan Zapata connected with a Romero cross to seal the three points with quarter of an hour to go in the San Siro.

For the first time this season Milan failed to score a goal, falling to their second defeat this campaign after losing to Juventus earlier this month.

Atalanta move fourth into the Champions League places, seven points behind the leaders, and two points adrift of Roma who went third after a 4-3 win over Spezia.

Coach Gian Piero Gasperini hailed "one of our best performances in recent years".

"Tonight we were a bit superior on everything, a great satisfaction to play like this in the San Siro."

Antonio Conte's Inter failed to follow on from their win over Juventus last weekend, and the chance to go top with a victory in Udine.

Chances were few for Inter with Lautaro Martinez having a goal ruled offside and Nicolo Barella volleying wide in the rain.

Frustrations boiled over with Conte banished from the sidelines at the end of the game for arguing with the referee.

"I think that more time could have been added on. I made the point to the referee and he sent me off," he said.

In Rome, Lorenzo Pellegrini scored a last-gasp winner as Roma bounced back after their Italian Cup defeat by Spezia with a 4-3 win over the promoted side.

The capital side have been in turmoil since their chaotic 4-2 extra-time loss to Spezia on Tuesday.

The official scoreline was changed to 3-0 on Friday, as Roma made six substitutions, with just five allowed, during the last-16 clash which they finished with nine men.

Captain Edin Dzeko was left out of the team on Saturday, officially because of a muscular injury, but amid reports of a fall-out with Fonseca.

Borja Mayoral scored a double for the hosts, netting the first after quarter of an hour, only for Roberto Piccoli to pull 14th-placed Spezia level seven minutes later by pouncing on a mistake by home goalkeeper Pau Lopez.

Diego Farias again responded for the visitors just before the hour, scoring the third goal of a dramatic six-minute spell at the Stadio Olimpico.

Pellegrini had the final say, though, drilling the ball into the roof of the net from close range after Bruno Peres' unselfish cutback.

It was a first league win in three games for Roma, after last week's defeat by Lazio in the Rome derby and a draw with title rivals Inter Milan.

"The team has come through a really tough week where we lost two games that we shouldn't have," Pellegrini said.

"This should bring a bit of calm."

Fiorentina, in 12th, eased their relegation worries with a 2-1 win over rock bottom Crotone, thanks to first half goals from Giacomo Bonaventura and Dusan Vlahovica.

Zlatan Ibrahimovic Football
Get the latest updates on IPL Auction 2023 and check out  IPL 2023 and Live Cricket Score. Like us on Facebook or follow us on Twitter for more sports updates. You can also download the NDTV Cricket app for Android or iOS.