Serie A: Rade Krunic curled in a free-kick after 27 minutes with Manchester United loanee Diogo Dalot doubling the visitors' account five minutes after the break to pull AC Milan three points behind Inter Milan, who host in-form Atalanta on Monday. 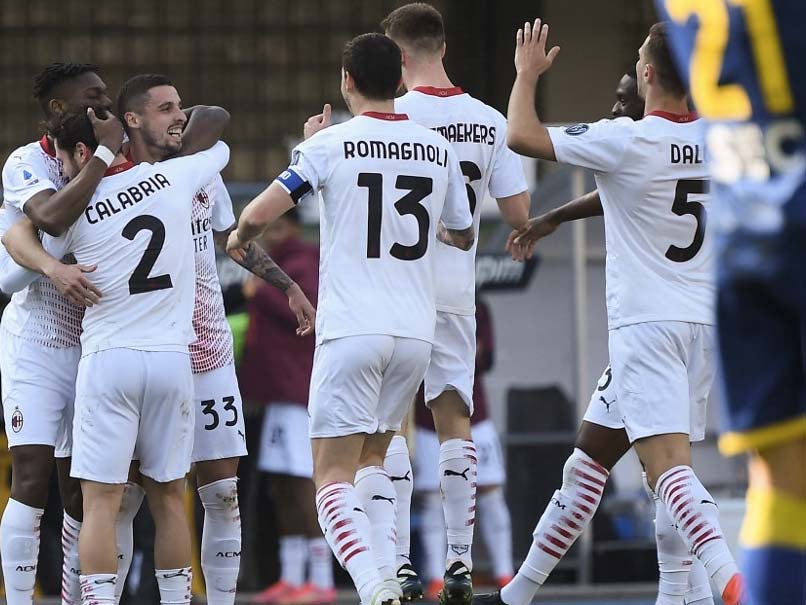 Serie A: Rade Krunic curled in a free-kick to break the deadlock for AC Milan.© AFP

Rade Krunic and Diogo Dalot scored in either half as AC Milanbeat Hellas Verona 2-0 to close the gap on Serie A leaders Inter before next week's Europa League trip to Manchester United. Krunic curled in a free-kick after 27 minutes with Manchester United loanee Dalot doubling the visitors' account five minutes after the break to pull Milan three points behind Inter, who host in-form Atalanta on Monday.

Champions Juventus are four points behind Milan in third, with a game in hand, after claiming their seventh straight win at home, 3-1 against Lazio on Saturday.

Despite the absence of key players including star striker Zlatan Ibrahimovicand defender Theo Hernandez, Milan kept the pressure on their city rivals two weeks after their 3-0 derby defeat.

Rafael Leao started up front in Ibrahimovic's absence, and the Portuguese forward threatened after quarter of an hour with a header which went over the bar.

The breakthrough came when Krunic was brought down just outside the box. The Bosnian midfielder dusted himself down and whipped a 27th-minute free-kick past a stunned Marco Silvestri from a tricky angle for his first league goal in Milan colours.

Defender Dalot also got off the mark in Serie A five minutes after the break, blasting in an Alexis Saelemaekers cross.

Milan took a valuable three points before they travel to Manchester for the first leg of their Europa League last 16 tie with United before hosting Napoli in the league next weekend.

Verona, in eighth, fell to their first home defeat since losing to Inter before Christmas.

Earlier Roma moved up to fourth, one point ahead of Atalanta thanks to a Gianluca Mancini goal, ahead of their Europa League tie against Shakhtar Donetsk in Rome.

Roma sit nine points behind Inter after the win.

"One more step is missing to beat the big teams, we need to improve because something more is needed to reach the Champions League," said Mancini.

Bottom side Crotone ended their seven-match losing streak with a 4-2 win over coronavirus-hit Torino.

The Turin club's last two games, against Sassuolo and Lazio, were unplayed because of a Covid-19 outbreak.

Atalanta Football
Get the latest updates on IPL Auction 2023 and check out  IPL 2023 and Live Cricket Score. Like us on Facebook or follow us on Twitter for more sports updates. You can also download the NDTV Cricket app for Android or iOS.