Like Messi, Takefusa Kubo joined the Barcelona academy as a child -- when just 10 -- but left in 2015 after the Catalans were punished by FIFA for breaking rules on signing under-age players. 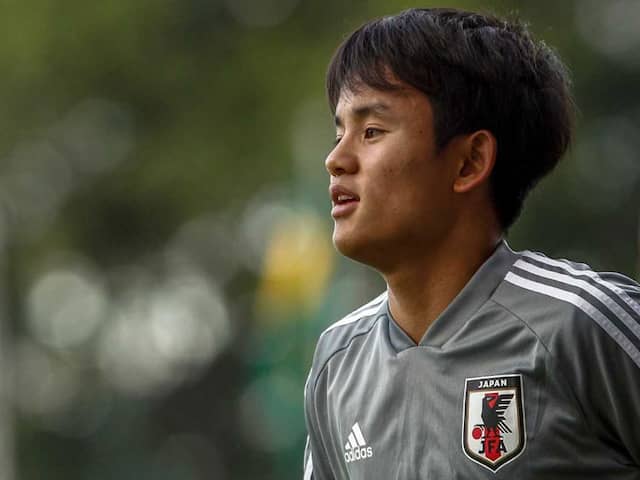 New teenage Real Madrid signing Takefusa Kubo said it was an "honor" to be nicknamed the "Japanese Messi" when speaking to reporters at the Copa America on Thursday. Earlier in the day, Spanish giants Real announced the 18-year-old was joining the record 13-time European champions from FC Tokyo, to play for their B team next season. "Being called the Japanese Messi is an honor and makes me proud, but I'm still not at his level and I prefer to concentrate on my abilities and strengths," said Kubo from Japan's Copa America base in Sao Paulo.

Like Messi, Kubo joined the Barcelona academy as a child -- when just 10 -- but left in 2015 after the Catalans were punished by world football's governing body FIFA for breaking rules on signing under-age players.

His dribbling skills -- which drew comparisons to Messi -- made him a YouTube sensation as a child.

But while flattered by comparisons, he still wants to be appreciated for his own attributes.

"There are several players like me, but I'm me, not some other player," he added, speaking Spanish.

Kubo wasn't allowed to speak about his transfer so as not to let the issue deflect from Japan's Copa preparations.

He has signed a six-year contract worth two million euros (USD 2.25 million) a year, according to Spanish and Japanese media.

Earlier this year, Kubo became the youngest ever goalscorer in the J-League, boosting his profile back home almost to the level of icons Hidetoshi Nakata and Keisuke Honda.

Kubo has a wise head on his young shoulders and is keeping his feet on the ground in Brazil.

"The most important thing is to absorb as much as possible" at the Copa America, he said.

"All I must do is express what I know how to do in the game, nothing more."

He's the youngest player in Japan's youthful squad whose average age is just 22.

In fact, only six of the players had even earned a cap when the final 23-man competition squad was announced by coach Hajime Moriyasu last month.

"I've played with most of them before, I want to play with a spirit that will make them proud," said Kubo, who only made his debut for Japan on June 9 in a 2-0 win over El Salvador in a friendly in Miyagi.

Japan make their Group C bow on Monday in Sao Paulo against champions Chile, who have "a strong mentality of never giving up," said Kubo.