Carlo Ancelotti was in an excellent mood during Real Madrid's trophy parade as they won their 35th LaLiga title on Saturday. 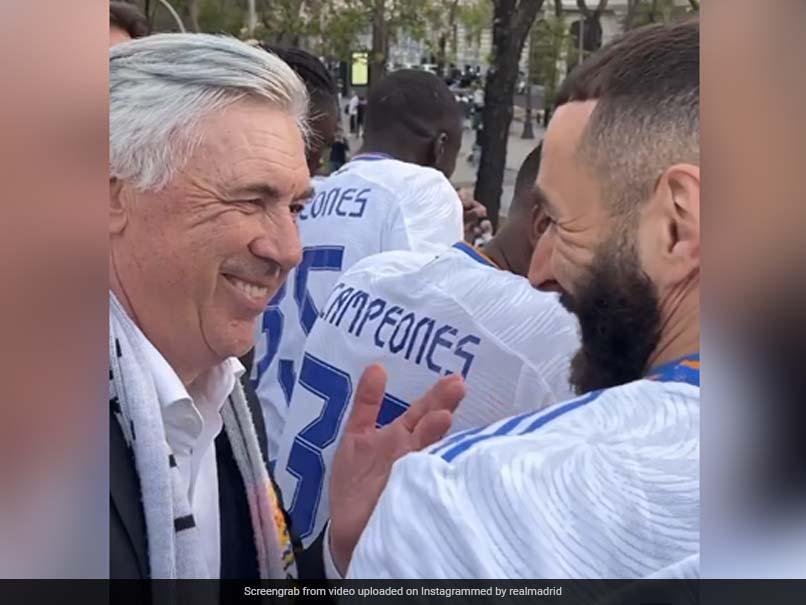 Having recently led Real Madrid to their 35th LaLiga title, Carlo Ancelotti was visibly overjoyed during the team's trophy parade. The Italian was recorded by the club's social media handle as he played a funny prank on Karim Benzema which left the star striker confused for a moment. But after realising that it was his head coach, the star striker was left in splits.

Here is the video of Ancelotti playing a funny prank on Benzema:

Real Madrid won the title after sealing a 4-0 win vs Espanyol on Saturday at the Santiago Bernabeu.

Rodrygo opened the scoring with a goal in the 33rd-minute and then completed his brace in the 43rd-minute.

Entering half-time with a 2-0 lead, the Los Blancos increased their advantage in the 55th-minute with Marco Asensio scoring a goal. Karim Benzema made it 4-0 in the 81st-minute.

The club from the Spanish capital won the league with four matches to spare and have registered 81 points from 34 matches until now (25 wins, six draws and three losses).

After the title win, Ancelotti told Mobistar Plus, "It's the first time I've won a title at the Bernabeu, the atmosphere is really something special".

"If I was crying (at the final whistle), it's because I'm happy."

This is also the first time since 1989-90 that Real Madrid have won the league title with four games to spare.

Karim Benzema Carlo Ancelloti Football
Get the latest updates on Fifa Worldcup 2022 and check out  Fifa World Cup Schedule, Stats and Live Cricket Score. Like us on Facebook or follow us on Twitter for more sports updates. You can also download the NDTV Cricket app for Android or iOS.