Cristiano Ronaldo hit his 70th Champions League goal -- one short of the all-time record 71 held by Raul -- as Real Madrid beat Liverpool 3-0. In Brussels, late goals by Kieran Gibbs and Lukas Podolski handed Arsenal a dramatic 2-1 win away to Anderlecht. 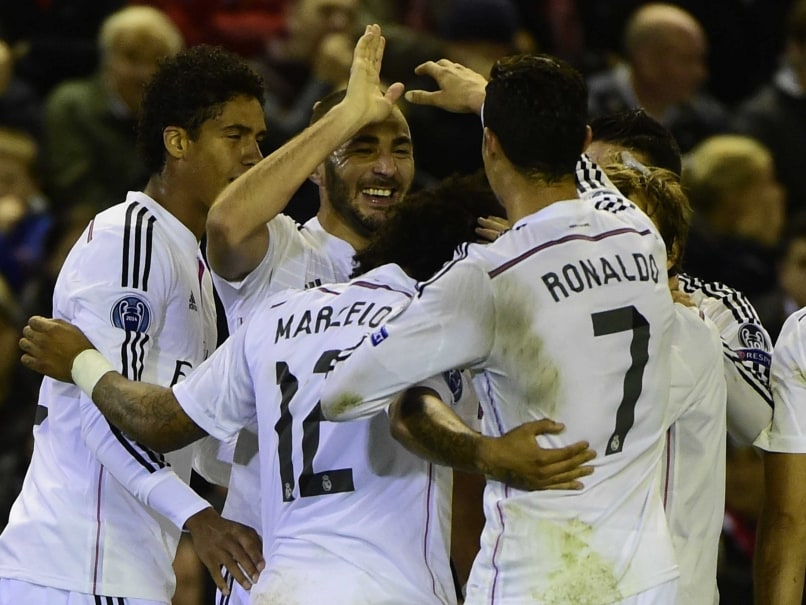 Real Madrid celebrate after scoring a goal at Anfield.© AFP

At Anfield, Cristiano Ronaldo hit his 70th Champions League goal -- one short of the all-time record 71 held by Raul -- and his 20th of the season with Karim Benzema grabbing a brace.

Real maintained their 100 percent record in Group B as did Borussia Dortmund in Group D after trouncing Galatasary 4-0.

In a further demonstration of the power of Spanish and German football, Atletico Madrid routed Malmo 5-0 while Bayer Leverkusen saw off Zenit Saint Petersburg 2-0.

"It was special, my first goal at Anfield and I am very happy," said Ronaldo.

"We knew that Anfield is a difficult place but we were fantastic in the first 45 minutes and we deserved to win."

He added: "I'm not worried about the Champions League goalscoring record. I know I will beat it. The best thing is that the team has nine points."

Ronaldo had never scored at Anfield in his five appearances for Manchester United, but he needed only 23 minutes to break that barren run.

Seizing possession in a central area 25 yards from goal, Ronaldo moved the ball onto James Rodriguez before sprinting into the penalty area to meet the Colombian's chipped pass, which dropped perfectly over three Liverpool defenders, with a sublime finish as he held off Martin Skrtel to flick his shot past Simon Mignolet.

To make matters worse for Liverpool, Mario Balotelli was hauled off at half-time after swapping shirts with Pepe in the tunnel in a move that will hardly quell the feeling the striker is developing into a major flop.

"For me, if you want to do that it's something you do at the end of the game. I will deal with that tomorrow (Thursday)."

Ludogorets Razgrad of Bulgaria moved into second place behind Real after a last-gasp 1-0 win over Basel.

In Brussels, late goals by Kieran Gibbs and Lukas Podolski handed Arsenal a dramatic 2-1 win away to Anderlecht.

An Andy Najar header in the 71st minute looked set to give the Belgian champions a rare European victory until Gibbs volleyed in a Calum Chambers cross with a minute left.

Substitute Podolski then struck a minute into injury time to seal all three points, to the great relief of Wenger.

Arsenal sit three points behind Dortmund, but are five clear of the sides below them and well on course for a place in the last 16 with the reverse fixture with Anderlecht to come next.

"They had big chances that they didn't take, and our experience made the difference. Unexpectedly, but as long as we didn't concede the second goal we had a chance at least to take a pont," said Wenger.

"Maybe we didn't deserve to win it because of the quality of match Anderlecht played tonight."

Last year's runners-up Atletico Madrid moved a step closer to qualifying for the last 16 with a comfortable 5-0 win over Malmo at the Vicente Calderon to go top of Group A.

It took the Spanish champions until after half-time to make the breakthrough, but once Koke had finished off a fine team move to open the scoring there was little doubt Diego Simeone's men were headed for victory.

Two goals in two minutes from Mario Mandzukic -- his 19th in 23 Champions League appearances -- and Antoine Griezmann just after the hour mark made the game safe before late goals from Diego Godin and Alessio Cerci rounded off the scoring.

Previous leaders Juventus slumped to a 1-0 loss at Olympiakos with Swiss midfielder Pajtim Kasami scoring a first half winner.

Monaco's goalless draw at home to Benfica means Leverkusen took over at the top, despite having lost their opening match at Monaco before beating Benfica at the BayArena.

Leverkusen were forced to play the final ten minutes a man down after Brazilian left-back Wendell was sent off for a second yellow-card.

Comments
Topics mentioned in this article
Real Madrid Liverpool Arsenal Anderlecht Football
Get the latest updates on IPL 2020, check out the IPL Schedule for 2020 and Indian Premier League (IPL) Cricket live score . Like us on Facebook or follow us on Twitter for more sports updates. You can also download the NDTV Cricket app for Android or iOS.