Antonio Conte's side went ahead through Cesar Azpilicueta's first-half strike at Stamford Bridge. 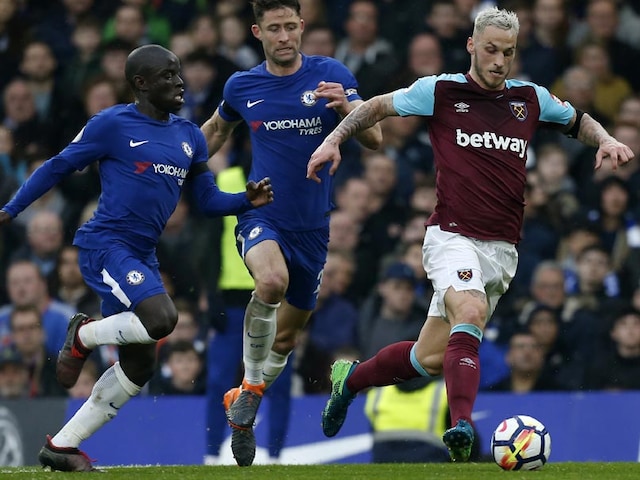 Chelsea's faint hopes of a top-four finish in the Premier League suffered a potentially fatal blow as Javier Hernandez's late equaliser gave struggling West Ham a 1-1 draw on Sunday. Antonio Conte's side went ahead through Cesar Azpilicueta's first-half strike at Stamford Bridge. But Chelsea missed a host of chances to increase their advantage and were made to pay when Hernandez came off the bench to snatch the leveller with 17 minutes left. Conte had admitted losing at home to Tottenham for the first time in 28 years last weekend was a huge setback in Chelsea's bid to salvage a dismal campaign by qualifying for the Champions League. With fifth-placed Chelsea lagging 10 points behind fourth-placed Tottenham with only six games remaining, this frustrating result should end their top-four challenge. West Ham, now six points clear of the relegation zone, were ecstatic to escape with a point despite a largely limp display.

But it was a disappointing conclusion to a miserable week for Chelsea, who were mourning the death of their former star Ray Wilkins.

Wilkins died at the age of 61 after suffering a cardiac arrest.

The former England midfielder, who played for Chelsea for six years in the 1970s and had several spells as the club's assistant coach, was remembered by fans who laid flowers outside the stadium.

Inside, Chelsea and West Ham supporters, usually fierce rivals, united to sing "there's only one Ray Wilkins" and held aloft a huge flag with his image.

There was a minute's applause before kick-off, with Chelsea's players all wearing number eight warm-up shirts in recognition of Wilkins' old jersey.

Respects paid, Chelsea had to focus on finding a way to end a damaging run of one win from their previous four league matches.

Eden Hazard's indifferent form has epitomised Chelsea's struggles and the Belgian playmaker had gone seven games without a goal.

- Temporary reprieve -
Hazard came close to ending that streak when he made a penetrating run to the edge of the area and flashed a shot just wide.

Chelsea were in control but when Alvaro Morata found the back of the net from Hazard's pass, the Spain striker's effort was ruled out for offside.

Hazard was looking more like his old self and he combined with Cesc Fabregas to prise open the West Ham defence, but Morata's deft back-flick rolled wide.

Back in the groove, Hazard provided the impetus for another flowing Chelsea move that saw Willian's shot pushed over by West Ham goalkeeper Joe Hart.

It was only a temporary reprieve for West Ham as Conte's men took a 36th-minute lead from the resulting short corner.

Victor Moses, left unmarked by West Ham's ponderous defence, scooped a cross towards Morata and he headed down to Azpilicueta, who controlled before poking a soft shot past Hart for his first goal since October.

Willian was inches away from doubling Chelsea's lead early in the second half after Hazard's clever back-heel gave the Brazilian space to shoot just wide.

Morata has endured a difficult first year with Chelsea and his fortunes weren't improving as he headed over from a corner before having another effort disallowed for offside.

All those near-misses came back to haunt Chelsea in the 73rd minute.

Mark Noble pumped a long ball into the Chelsea area and Blues captain Gary Cahill responded with a mistimed header that dropped for Marko Arnautovic.

A quick pass from Arnautovic found Hernandez and the striker, on for just three minutes, drilled a fine finish past Thibaut Courtois.

Marcos Alonso almost spared Chelsea's blushes with a thunderous strike, but Hart finished as West Ham's hero with superb saves to keep out that effort and one from an Olivier Giroud header.

Comments
Topics mentioned in this article
Chelsea West Ham United César Azpilicueta Football
Get the latest Cricket news, check out the India cricket schedule, Cricket live score . Like us on Facebook or follow us on Twitter for more sports updates. You can also download the NDTV Cricket app for Android or iOS.