Bernardo Silva scored the only goal of the match 35 seconds into the second half at the Etihad Stadium when he prodded home at the back post from David Silva's low cross. 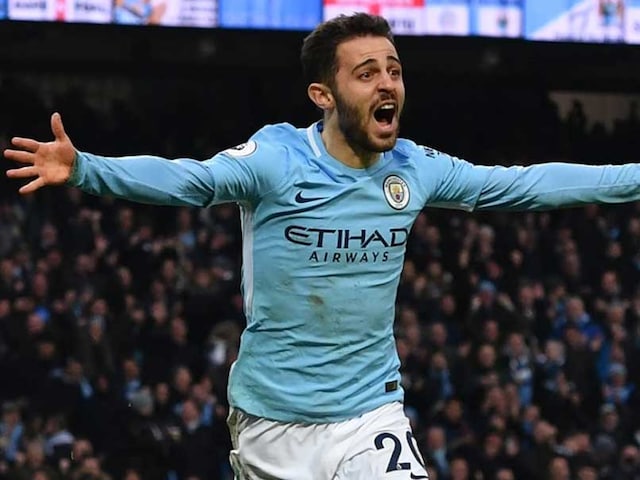 Bernardo Silva scored for the winners in the 46th minute© AFP

Manchester City's relentless run towards the Premier League title continued as they opened up an 18-point lead by inflicting more damage on Chelsea's chances of a top-four finish with a 1-0 home win on Sunday. Bernardo Silva scored the only goal of the match 35 seconds into the second half at the Etihad Stadium when he prodded home at the back post from David Silva's low cross. Chelsea's fourth defeat in five league games left Antonio Conte's reigning English title-holders five points adrift of the Champions League places.

And the Italian's negative approach will come under scrutiny after he again opted to start without a recognised centre-forward by leaving Alvaro Morata and Olivier Giroud on the bench.

City now need a maximum of four wins from their last nine league games to seal the title and were well worthy of another victory despite not needing to hit some of the heights they have so far this season.

Just as in a 3-0 win at Arsenal on Thursday, Leroy Sane was the inspiration for much of City's best attacking play.

Sane created the hosts' first big chance 21 minutes in when he slalomed past three Chelsea defenders before feeding Bernardo Silva.

However, unlike his opening goal at Arsenal, Silva's shot dipped just too late and dropped onto the roof of the net.

City were fortunate to escape moments later, though, when Oleksandr Zinchenko wiped out Victor Moses with a wild lunge that could easily have drawn a red rather than a yellow card from referee Michael Oliver.

Sane thought he had opened the scoring just before the half-hour mark when he caught Kevin De Bruyne's cross flush, but Chelsea captain Cesar Azpilicueta bailed out his side with an excellent goal-line clearance.

The German winger sparked the danger once more moments later as his pass picked out Bernardo Silva via a dummy from David Silva, but the Portuguese blazed high and wide on his favoured left foot.

So anonymous were Chelsea as an attacking threat that their own fans sarcastically cheered when a rare foray forward earned a corner just before the break.

However, Conte's contain and counter-attack game plan was undone within a minute of the second period when Sergio Aguero's reverse pass picked out David Silva and his namesake Bernardo knocked the ball into the ground and over the helpless Thibaut Courtois for his seventh goal of the season.

Thereafter, City were quite content to keep possession as Chelsea still refused to abandon their cautious approach.

By then it was nearly too late as Sane again escaped the clutches of Victor Moses but his low teasing cross just evaded Aguero in the middle.

Chelsea's club-record signing Morata had to wait until the final minute to get on, but even then it was top scorer Hazard who was sacrificed and the Belgian cut a frustrated figure as he trudged off in the pouring rain.

The visitors could have snatched an unlikely point in stoppage time only for Marcos Alonso's mishit strike from the edge of the box to dribble wide.

And a jubilant Pep Guardiola celebrated wildly at full-time safe in the knowledge it would now take a monumental collapse to miss out on delivering his first Premier League title.

Comments
Topics mentioned in this article
Chelsea Manchester City Bernardo Silva English Premier League Football
Get the latest updates on IPL 2020, check out the IPL Schedule for 2020 and Indian Premier League (IPL) Cricket live score . Like us on Facebook or follow us on Twitter for more sports updates. You can also download the NDTV Cricket app for Android or iOS.