Patrice Evra Vows To Return 'Stronger Than Ever'

Patrice Evra was sent off after attacking the Marseille fan ahead of the Ligue 1 side's 1-0 Europa League defeat to Vitoria Guimaraes on November 2. 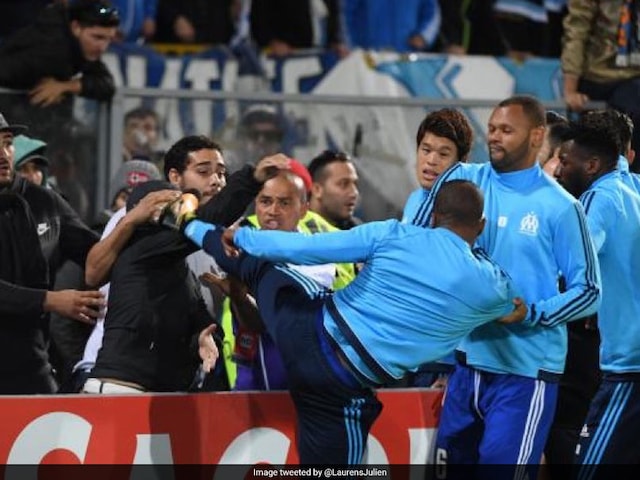 Patrice Evra has promised to come back stronger.© AFP

Patrice Evra has vowed to come back "stronger than ever" in his first public message since leaving Marseille and being hit with a season-long European football ban for kung-fu kicking a supporter. Evra, who was sent off after attacking the Marseille fan ahead of the Ligue 1 side's 1-0 Europa League defeat to Vitoria Guimaraes on November 2, made the promise while pulling a Jeep in a light-hearted Instagram post filmed in Dubai by former Arsenal and Chelsea striker Nicolas Anelka, who Evra nicknamed "Spielberg" in the post.

"I swear to God I will come back stronger than ever," said the former France and Manchester United left-back.

"Sometimes life you can feel really heavy but you always have to keep smiling, and of course keep loving this game."

The 36-year-old's ban only applies to UEFA club competitions, meaning that he could still play in a domestic league should a club approach him.

Evra, who has won five Premier titles, two Serie A championships and the Champions League, parted ways with Marseille on Saturday almost immediately after being banned from European competition and fined 10,000 euros (USD 11,650, 8,891 pounds).

Evra lashed out in response to a group of supporters that had come to the pitchside to berate him for what they considered sub-par displays on the south coast of France.

On Sunday Marseille goalkeeper Steve Mandanda backed his former teammate, saying that Evra was a "true friend and a good guy", while France coach Didier Deschamps described his punishment as "heavy".

The club's American owner Frank McCourt blamed both player and fans for the incident, calling it "unacceptable behaviour" and "not something we can tolerate at "Marseille".

Evra's dismissal from Marseille also came after supporters unfurled a huge banner before their home match with Caen last week that read: "We don't want you in our colours anymore. Evra get lost."

Comments
Topics mentioned in this article
Manchester United Marseille France Patrice Evra Football
Get the latest Cricket news, check out the India cricket schedule, Cricket live score . Like us on Facebook or follow us on Twitter for more sports updates. You can also download the NDTV Cricket app for Android or iOS.