The incident was reminiscent of another Manchester United legend, Eric Cantona, kung-fu kicking a Crystal Palace fan at Selhurst Park in 1995. 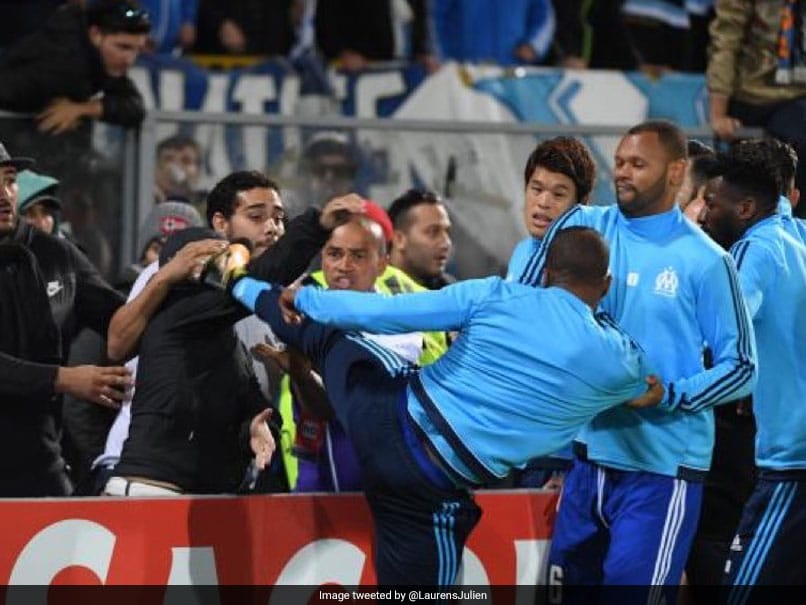 Former Manchester United star Patrice Evra, who currently plies his trade with French club Marseille, was sent off in astonishing circumstances even before the Europa League match between Marseille and Vitoria Guimaraes started. Evra was pictured launching a karate-style kick on a fan said to be from his own team. The French defender was seen in a heated exchange with a group of Marseille fans in Portugal before aiming a head-high kick at a supporter. The incident was reminiscent of another Manchester United legend, Eric Cantona, kung-fu kicking a Crystal Palace fan at Selhurst Park in 1995.

Cantona's assault led to a nine-month ban handed down by the English Football Association and it is expected that Evra too now faces a lengthy UEFA ban.

Stewards and Evra's teammates quickly surrounded Evra and intervened before more harm could be done. The 36-year-old, who was originally listed as a substitute, was ordered to return to the dressing room by the referee.

A fan posted a video of the incident.

Twitter quickly got into the groove as fans posted some hilarious memes of the incident.

Who did it better?

Looks like Patrice Evra has been practising that karate kick. pic.twitter.com/ro8LgOAE23

Patrice Evra kicks a fan in the head, that only means one thing ... pic.twitter.com/3HQ8NIuQMe

"Pat has experience, and he must not react, it's obvious," said Marseille coach Rudi Garcia whose side lost the game 1-0 and also had Boubacar Kamara sent off three minutes from time.

"Patrice is a more than just an experienced player. You can't respond, of course, to insults as bad as they are and as incredible as they might be because they come from one of our supporters."

"He must learn to keep his cool. That's all I can say."

Comments
Topics mentioned in this article
Marseille Patrice Evra Manchester United Football
Get the latest updates on ICC T20 Worldcup 2022 and CWG 2022 check out the Schedule, Live Score and Medals Tally. Like us on Facebook or follow us on Twitter for more sports updates. You can also download the NDTV Cricket app for Android or iOS.