Neymar rolled in a 10th-minute spot-kick following consultation with the video assistant referee. 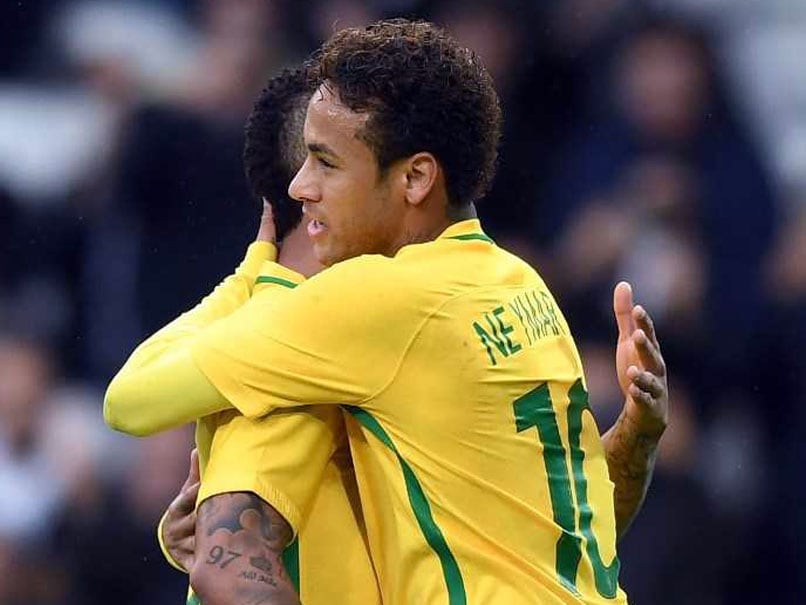 Neymar celebrates after opening the scoring for Brazil against Japan.© AFP

Neymar scored a penalty and missed another as Brazil signalled their intent ahead of FIFA World Cup 2018 by outclassing Japan, 3-1, in Friday's international friendly in Lille. The Paris Saint-Germain star rolled in a 10th-minute spot-kick following consultation with the video assistant referee, although Neymar saw a second penalty saved shortly after by Eiji Kawashima. Marcelo rifled in a magnificent second as Brazil doubled their lead on 17 minutes, with Manchester City's Gabriel Jesus rounding off a clinical counter-attack before half-time to make it 3-0.

Tomoaki Makino nodded in a consolation from a corner on 62 minutes but Japan remain winless against Brazil, losing for the 10th time in 12 meetings.

"I don't know what was happening in their heads in the first half," said Japan coach Vahid Halilhodzic.

"The penalty was whistled because of the video and perhaps that threw the team off."

He added: "It's a shame about the first half, the second half gave me quite a bit of satisfaction.

"I see plenty of things we need to improve and we'll draw a lot of things from this match."

Neymar was joined by PSG team-mate Thiago Silva in the Brazil line-up as coach Tite picked a strong side despite playing in front of a sparsely-filled Stade Pierre-Mauroy in northern France.

Halilhodzic, who served a four-year spell as Lille coach over a decade ago, called up 12 Europe-based players for the double-header with Brazil and Belgium, but experienced attacking trio Shinji Kagawa, Shinji Okazaki and Keisuke Honda were all overlooked for selection.

Japan were thrashed 4-0 by a Neymar-inspired Brazil in their last encounter in 2014 and again quickly found themselves under threat from the world's most expensive player.

He slipped Giuliano through down the right-hand side after carving open space, with captain Yuto Nagatomo forced to produce a vital sliding block.

Brazil were soon in front as referee Benoit Bastien belatedly awarded a penalty after the video official spotted Maya Yoshida tugging the jersey of Fernandinho at a corner.

Neymar calmly converted for his 53rd international goal -- eight of which have come against Japan -- and the 25-year-old should have added to his tally five minutes later after Jesus was barged over by Hotaru Yamaguchi.

But this time Kawashima dived low to his right to deny Neymar, although Brazil surged further ahead from the resulting corner through a thunderbolt from Marcelo.

Yosuke Ideguchi's poor clearance trickled invitingly into the path of the Real Madrid left-back who hammered a right-footed strike into the top corner from 20 yards.

Yoshida nearly atoned for his early blunder on the half-hour as he crashed a free-kick against the crossbar, but Japan were ruthlessly dissected as Brazil further flexed their muscles on 36 minutes.

Neymar triggered a swift break after a Japanese attack broke down, with Willian releasing the overlapping Danilo whose driven low cross was tapped in by Manchester City team-mate Jesus at the far post.

Brazil substitute goalkeeper Cassio, who replaced Alisson for the second half, clawed away a fizzing shot from Takuma Asano, while Neymar was booked for a tangle with Marseille defender Hiroki Sakai after the incident was reviewed by the VAR.

Japan trimmed the deficit on 62 minutes when centre-back Makino headed in from a corner before a raft of substitutes in the final quarter disrupted the flow of the contest.

Comments
Topics mentioned in this article
Brazil Japan Neymar Football
Get the latest updates on ICC Women's Cricket World Cup 2022 and IPL 2022, check out the Schedule , Live Score and IPL Points Table. Like us on Facebook or follow us on Twitter for more sports updates. You can also download the NDTV Cricket app for Android or iOS.