The draw against Germany was enough to send the Netherlands into the Nations League knockout stages as Group One winners. 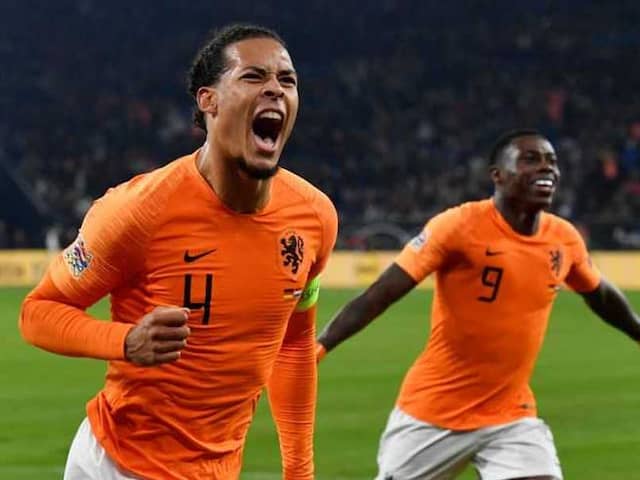 Virgil van Dijk sent the Netherlands into the Nations League semi-finals after completing a dramatic comeback from two goals down with a 91st-minute equaliser that saw the Dutch snatch 2-2 draw away to Germany on Monday. The Dutch advance from the tough three-team Group A1 at the expense of world champions France after scoring twice in the final six minutes in Gelsenkirchen as Germany were punished for not being clinical enough in the second half. Liverpool defender Van Dijk fired home to complete the Dutch fight back after Quincy Promes pulled one back on 85 minutes following Timo Werner and Leroy Sane's first-half goals for Germany.

"It was very difficult for us, the Germans were sharper and faster in the first half," admitted Dutch coach Ronald Koeman.

"We fought to come back in the second half and pressed.

"They had their chances to finish it off, but the fight and belief we showed was enough for the point."

The draw was enough to send the Dutch into the Nations League knockout stages as Group One winners, with France second, while bottom side Germany were already relegated to the 'B' league ahead of Monday's clash.

Koeman's side showed plenty of heart against the Germans, who were 2-0 up after just 20 minutes.

"We were punished and that's bitter.

"We played well for much of the game, but we have to learn how to close things down at 2-0 up."

Thomas Mueller reached the milestone of 100 Germany appearances as a second-half replacement, but Van Dijk dampened any celebrations for the hosts.

Having described 2018 as a "slap in the face" after a record six defeats in a calender year, Germany showed the "killer instinct" Loew had called for -- but only in the first half.

The trio of Serge Gnabry, Sane and Werner, so effective in Thursday's 3-0 friendly win over Russia, again caused the Dutch defence no end of problems in the opening 45 minutes.

Having started the rebuilding process in the wake of Germany's woeful World Cup display, crashing out after the group stages, Loew started with only three Brazil 2014 winners in Manuel Neuer, Mats Hummels and Toni Kroos.

Koeman made two changes from Friday's 2-0 win over France, which gave them the chance to qualify on Monday, with Kenny Tete taking over from Denzel Dumfries at right back and Promes on the right wing ahead of Steven Bergwijn.

Germany needed just nine minutes to land the first blow in the clash of the European heavyweights.

There was little on when Gnabry's pass found Werner on the edge of the area, but the 22-year-old showed ice-cold finishing by hitting the bottom corner of the net past Jasper Cillessen.

Werner ended his barren run of eight internationals without a goal and Sane added the second, with the help of a deflection, 11 minutes later to seemingly floor the Dutch.

Again, there was little on when Toni Kroos floated in a long pass to Sane, who stumbled slightly, but managed to win the ball and fired home a shot which clipped the boot of a defender as it sailed past Cillessen.

A hamstring injury to Ryan Babbel forced Koeman to reshuffle his attack with Javairo Dilrosun coming on just before the half-time whistle.

Werner fired wide after getting in behind the defence, but from that point on the Dutch began to take charge.

Werner made way for Germany's chief playmaker Marco Reus with 27 minutes left as Loew also introduced the experienced Mueller, but it was not enough to defend the lead.

The Dutch scored from their first real attack when Promes curled his shot home on 85 minutes after sustained pressure from the hosts.

The scene was set for Van Dijk to complete the fairytale comeback when he produced a thumping finish to delight travelling fans just before the final whistle.

France Timo Werner Leroy Sané Virgil Van Dijk Football
Get the latest Cricket news, check out the India cricket schedule, Cricket live score . Like us on Facebook or follow us on Twitter for more sports updates. You can also download the NDTV Cricket app for Android or iOS.