Nations League: Italy, top of the group with five points, extended their unbeaten run under coach Roberto Mancini to 18 matches. 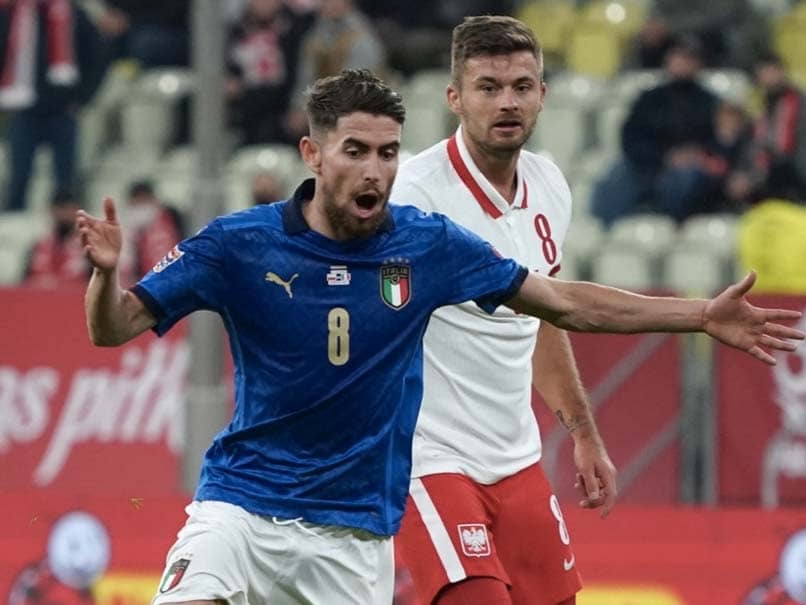 Italy settled for a goalless draw against Poland in their Nations League A, Group 1 match in Gdansk.© AFP

Italy failed to make their most of their domination on Sunday as they settled for a goalless draw against Poland in their Nations League A, Group 1 match in Gdansk. Italy, top of the group with five points, nevertheless extended their unbeaten run under coach Roberto Mancini to 18 matches. "We had several opportunities, especially in the first half when we could have scored at least two goals," said Mancini. "The pitch was in very bad condition which could have played a role. Beyond the result, however, we are happy. We didn't score but it happens."

Italy host the Netherlands, who have four points, in Bergamo on Wednesday with Poland, also on four points, taking on Bosnia and Herzegovina in Warsaw.

The 'Azzurri' came into the game off a 6-0 friendly win over Moldova in Florence with an Italy 'B' team.

But Mancini reverted to his regular setup with a midfield built around Nicolo Barella, Jorginho and Marco Verratti.

Federico Chiesa had Italy's best chance after 10 minutes with the newly-signed Juventus winger sending an Andrea Belotti cross wide on front of goal.

Belotti in turn missed a chance to finish off after 23 minutes.

Emerson Palmieri made a decisive block on Robert Lewandowski, with Chiesa teeing up Emerson just after the hour, but the Chelsea defender headed off target.

Sassuolo trio Francesco Caputo, Domenico Berardi and Manuel Locatelli all came on in the final minutes but failed to break through.

Emerson again threatened with 10 minutes to go after connecting with a Verratti cross but Polish goalkeeper Lukasz Fabianski denied the effort.

At the other end of the pitch Gianluigi Donnarumma easily dealt with a Kamil Jozwiak header.

Poland Football
Get the latest updates on IPL 2020, check out the IPL Schedule for 2020 and Indian Premier League (IPL) Cricket live score . Like us on Facebook or follow us on Twitter for more sports updates. You can also download the NDTV Cricket app for Android or iOS.