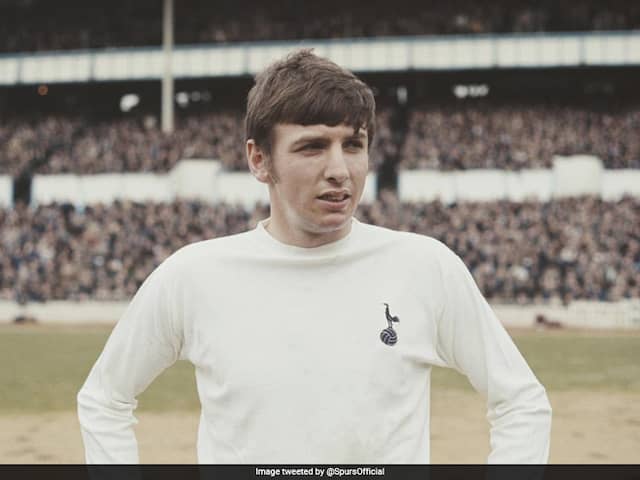 In 2016, it was revealed Martin Peters had been diagnosed with Alzheimer's disease.© Twitter

Former West Ham and Tottenham midfielder Martin Peters, who scored England's second goal in the 1966 World Cup final against West Germany, has died aged 76 following a long battle against Alzheimer's disease. Peters, whose death was announced by West Ham, was part of the Hammers trio of captain Bobby Moore and Geoff Hurst, who scored a hat-trick in the 4-2 victory at Wembley, for England's only World Cup triumph.

"Everyone at West Ham United is deeply saddened by the tragic news that legendary Hammer Martin Peters MBE has died at the age of 76," West Ham said in a statement.

"The 1966 World Cup winner passed away peacefully in his sleep in the early hours of Saturday morning, following a long and courageous battle with illness."

Peters, who won 67 England caps and scored 20 goals, is the fifth member of England's World Cup winning side to pass away after Alan Ball, Ray Wilson, Gordon Banks and Moore.

Hurst mourned the loss of Peters, hailing his old team-mate as one of the England's finest players.

"Today is a very sad day for football and for me personally. Martin Peters was one of the all-time greats and a close friend and colleague of mine for in excess of 50 years," he tweeted.

"A fellow World cup final goalscorer and my West Ham partner for years along with Bobby Moore. RIP old friend."

Peters came through the West Ham academy, having signed as an apprentice in 1959 and went on to help the east London club win the European Cup Winners' Cup in 1965.

Renowned as the compete midfielder, Peters was good in the air, able to cross with either foot and possessed great movement.

His ability to drift into goalscoring positions unnoticed by his markers would see him nicknamed 'The Ghost'.

He later joined Tottenham as Britain's first £200,000 midfielder in 1970, in a deal which saw Spurs' all-time record scorer Jimmy Greaves going in the opposite direction to West Ham.

At Spurs, he won two League Cups and the first UEFA Cup in 1972 before spells at Norwich and Sheffield United were followed by his retirement in 1981.

Tottenham said they were "extremely saddened" to hear of Peters' death, tweeting: "The thoughts of everyone at the club are with his family and friends at this difficult time."

In 2016, it was revealed Peters had been diagnosed with Alzheimer's disease.

A statement from Peters' family said: "A beloved husband, dad and grandad, and a kind, gentle and private man, we are devastated by his loss but so very proud of all that he achieved and comforted by the many happy memories we shared."

A tweet from the official England account read: "We're deeply saddened to learn of the passing of Martin Peters MBE, scorer of the Three Lions' second goal in the 1966 World Cup final, at the age of 76. Our thoughts are with Martin's family and friends at this difficult time."