Marco Asensio entered the game at the start of the second half and scored less than two minutes in before adding another in the 56th minute. 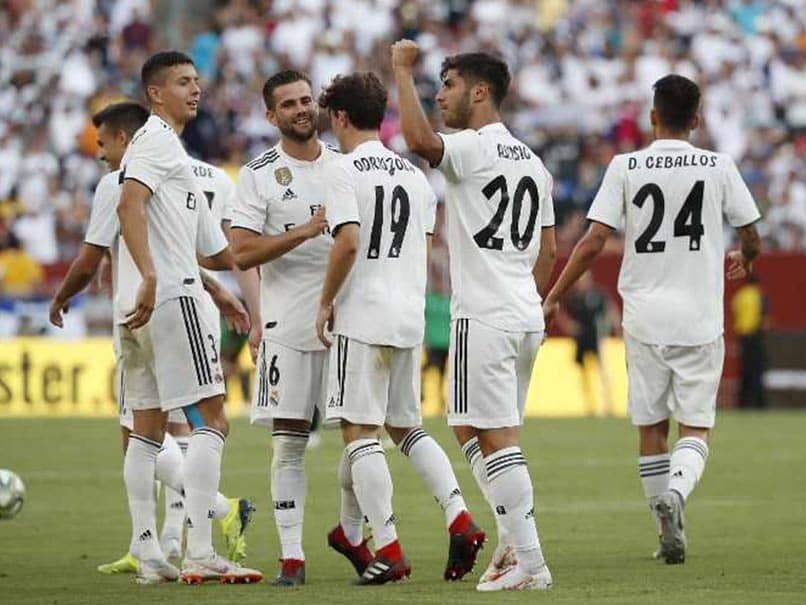 Marco Asensio subbed in after half-time and wasted no time getting on the board.© AFP

Substitute Marco Asensio made an immediate impact by scoring two early second-half goals as Real Madrid rallied to beat Juventus 3-1 in a pre-season exhibition contest on Saturday. Asensio entered the game at the start of the second half and scored less than two minutes in before adding another in the 56th minute. It was the first defeat of the pre-season and the final match of the International Champions Cup campaign for Italy's Juventus. The Serie A champions now open up their title defense at Chievo on August 18.

They were without new signing Cristiano Ronaldo, who did not make his debut against his former team. The Portuguese superstar skipped the club's US tour because he was recovering from his FIFA World Cup 2018 excursion.

Gareth Bale also scored for the European champions as the Welshman served notice that he is going to produce despite the loss of Ronaldo.

Bale hit a stunning shot from 20 yards out in the 39th minute to level the score at 1-1 in the front of the crowd of 60,000 at FedEx Field in Landover, Maryland.

Bale finished with 16 La Liga goals last season and is in his fifth campaign with Real Madrid.

Asensio subbed in after half-time and wasted no time getting on the board. He finished off a drive by side-footing a shot home in the 47th minute on a rush with Vinicius Jr., who also entered the game at half-time.

Asensio scored just nine minutes later to make it 3-1 for Real Madrid on another unselfish pass, this time from Lucas Vazquez. Asensio's shot deflected off the right arm of Juventus goalkeeper Wojciech Szczesny and trickled into the net.

Juventus' lone goal came in the 12th minute on an own goal by Real Madrid defender Dani Carvajal.

Carvajal was trying to corral Joao Cancelo's left side cross when he deflected the ball into his own net.

It was the first pre-season defeat for Juventus, who were without many of their key attackers for their US tour, including Douglas Costa, Paulo Dybala and Mario Mandzukic.