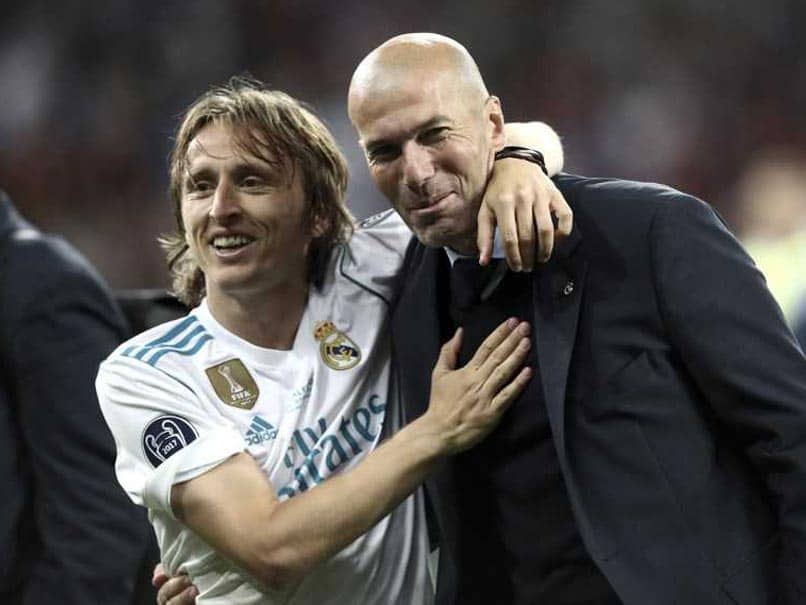 Luka Modric said he was lucky to have Zinedine Zidane as his coach.© AFP

Real Madrid midfielder Luka Modric has admitted that neither he nor his teammates expected both coach Zinedine Zidane and star Portuguese forward Cristiano Ronaldo to leave the football club last summer. Zidane stepped down as coach after leading the club to three consecutive Champions League titles, while Ronaldo ended his nine-year association with Spanish giants when he joined Italian football club Juventus in July, reports Efe. "I wasn't expecting either of the two to go; I didn't think Zidane would leave and the same with Ronaldo," said Modric in an interview with the latest edition of the magazine 'France Football.'

"In fact when the rumours about Cristiano appeared, we (Real Madrid players) had bets among ourselves and we were certain he would stay, but everyone makes their own decisions," he added.

The 33-year-old, who is the favourite to win the prestigious 'Ballon d'Or' award for this season, was asked which former players he would most liked to have lined up alongside and said his first choice was former Croatian international Zvonimir Boban; "he was my hero in the Croatian team," he said, before naming Zidane as his second choice.

"I was lucky to have him as a coach and we have lived some incredible moments with him at Real Madrid, sometimes he'd play alongside us and it was incredible to see how elegant he was and how he moved over the pitch," said Modric.

The Croatian international described himself as "much more timid," than Ronaldo and that he didn't "appreciate being over-exposed in the media.

"I prefer simplicity," he said.

Cristiano Ronaldo Zinedine Zidane Football
Get the latest updates on India vs Australia Series, check out the India vs Australia Schedule for 2020-21 and Ind vs Aus live score . Like us on Facebook or follow us on Twitter for more sports updates. You can also download the NDTV Cricket app for Android or iOS.