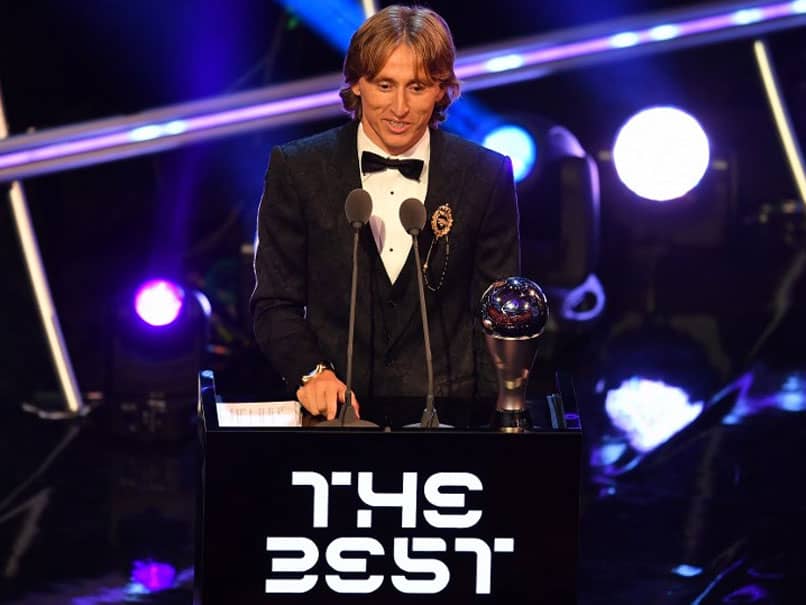 Luka Modric ended Cristiano Ronaldo and Lionel Messi's decade-long domination of football's individual awards by being crowned FIFA's best player of the year on Monday. The Real Madrid and Croatia midfielder starred for both club and country as Madrid won a third straight Champions League, and he inspired Croatia to reach the World Cup final for the first time. "The emotion is huge because it is thanks to the work of everyone. So many people have come together and so many have supported me," said Modric.

Modric beat out Liverpool's Egyptian forward Mohamed Salah and Ronaldo, who along with Messi did not attend the glitzy awards ceremony in London.

Both are in action for Juventus and Barcelona on Wednesday, but their no-show attracted criticism after so many years on top.

"Everyone has their own reasons," said Modric. "Obviously I would have liked them to be here but they aren't."

At 33, Croatia's run to the final was the culmination of a brilliant career for Modric that had often been overshadowed by Ronaldo's goalscoring in their time together in the Spanish capital, before the Portuguese left for Juventus in July.

Modric scored twice and also netted in penalty shootout wins over Denmark and Russia, but it was his playmaking ability that caught the eye in winning the Golden Ball for the best player at the World Cup.

"It was an unbelievable season, the best season in my life," said Modric.

"I'm still not realising how good a year I had collectively, individually, and I'm very proud for everything I achieved this year and it will be remembered forever."

For a sixth straight season, Ronaldo was the Champions League's top scorer with 15 goals and also scored four times at the World Cup, including a hat-trick against Spain in a thrilling 3-3 draw to open Portugal's campaign.

However, Portugal's last 16 exit to Uruguay in Russia and Ronaldo's failure to score in the semi-finals or final of the Champions League opened the door for Modric.

For the first time in 12 years, Messi was not among the finalists with Salah earning a place on the podium for his incredible 44-goal debut season with Liverpool that carried the Reds to the Champions League final.

Salah did not go away empty-handed, however, as he picked up the Puskas award for best goal for his strike against Everton in the Merseyside derby last December.

"I am as happy as if I had won it," said Ramos of Modric's success. "He deserves it, he is an excellent player and has marked an important era in the history of Real Madrid."

France's World Cup-winning coach Didier Deschamps won the best coach of the year prize in recognition for his work in leading Les Bleus to success in Russia.

Deschamps, who became just the third man to win the World Cup as a player and coach, beat off competition from Dalic and his former France team-mate Zinedine Zidane, who won a third consecutive Champions League title with Real Madrid before resigning in June.

Thibaut Courtois won the best goalkeeper award for helping Belgium reach the World Cup semi-finals as well as the FA Cup with Chelsea before a summer move to Madrid.

Brazil's Marta was crowned best women's player for a record sixth time for her role in winning the Copa America to beat out Lyon duo Ada Hegerberg and Dzsenifer Marozsan.

Lyon boss Reynald Pedros did win the award for best women's coach, though, after winning the Champions League with the French giants.

Real Madrid Luka Modric Football
Get the latest updates on IPL 2021, IPL Points Table , IPL Schedule 2021 , live score . Like us on Facebook or follow us on Twitter for more sports updates. You can also download the NDTV Cricket app for Android or iOS.