Lionel Messi had gone four games without a goal in La Liga, his longest drought since 2014. 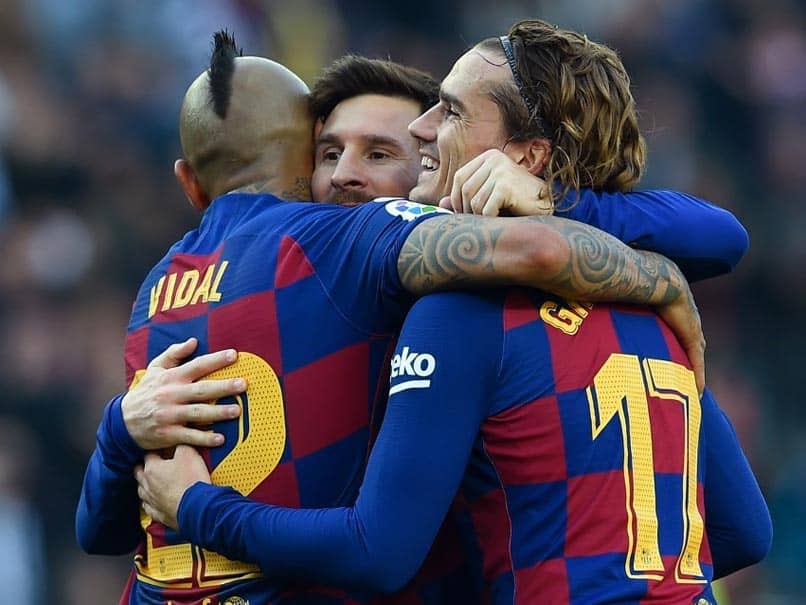 Lionel Messi scored four goals as Barcelona began a crunch week in their season by thrashing Eibar 5-0 in La Liga on Saturday. Barca play away at in-form Napoli in the Champions League on Tuesday before facing title rivals Real Madrid next weekend, with pressure on the team, and Messi, amid a period of political turbulence at the club. Yet on the pitch, Messi showed no sign of distraction as the 32-year-old completed the second fastest of his now 36 career hat-tricks, after just 40 minutes at Camp Nou. Messi added a late fourth after being teed up by Martin Braithwaite, Barcelona's emergency signing who enjoyed an excellent cameo off the bench by claiming two assists, the second for Arthur Melo in injury-time.

Braithwaite's contribution and Messi's return to form delivered a timely boost ahead of what could prove a pivotal few days in Barca's season.

Messi had gone four games without a goal in La Liga, his longest drought since 2014, even if those matches saw him register five assists. He now has 22 goals in 28 appearances this term.

And Braithwaite's arrival from Leganes on Thursday drew criticism after Barcelona capitalised on a curious La Liga rule that allows clubs to sign outside of the transfer window if they have lost a player to injury for more than five months.

Leganes, without their top scorer, were beaten earlier by fellow strugglers Celta Vigo but Braithwaite made the perfect start with his new team, to suggest he could yet prove a useful addition during the run-in.

Messi said in an interview with Mundo Deportivo last week that Barcelona, "the way we are now", will not have enough to go all the way in the Champions League, placing further doubts around the direction of the club on the back of his public spat with technical secretary Eric Abidal.

The Argentinian also described as "strange" the allegations, which have been denied by the club, that president Josep Maria Bartomeu hired a PR company that has criticised Barca players, including Messi, on social media.

Yet Saturday's victory means Quique Setien's side go top of La Liga, temporarily at least, with Real Madrid able to restore their one-point lead at the summit if they beat Levante later on Saturday.

Whatever happens, the reward for the winner of the Clasico next weekend will now claim first place, in a meeting at the Santiago Bernabeu that could have a considerable psychological impact on the title race.

With Napoli to come first in midweek in the Champions League last 16 first leg, Bartomeu will hope this result against Eibar sets the tone for recovery, particularly given the fans had waved white handkerchiefs, whistled and sang songs in protest against the club's president before kick-off.

Messi quickly got to work, scoring a brilliant first goal in the 14th minute after collecting the ball centrally, around 30 yards out.

He had three Eibar defenders in front of him but found a way through, nutmegging Anaitz Arbilla before chipping delicately into the corner.

The second came in the 37th minute as Sergio Busquets found Arturo Vidal, who feathered a flick into Messi's path. Messi surged forward, past his stumbling opponents, and fired in.

His third, three minutes later, was the simplest of the trio and arrived only after he tried to play in Antoine Griezmann. His generosity was rewarded as a sloppy Griezmann touch meant the ball cannoned back to Messi, who apologetically poked in.

Setien was able to take Griezmann off with 18 minutes left and introduce Braithwaite for his debut. Braithwaite's first contribution was a skewed cross but things improved immeasurably from there, as two passes across goal gave Messi his fourth and Arthur his first.