Ligue 1: Neymar is expected to be sidelined for between six and eight weeks after sustaining ligament damage to his left ankle, Paris Saint-Germain said on Monday. 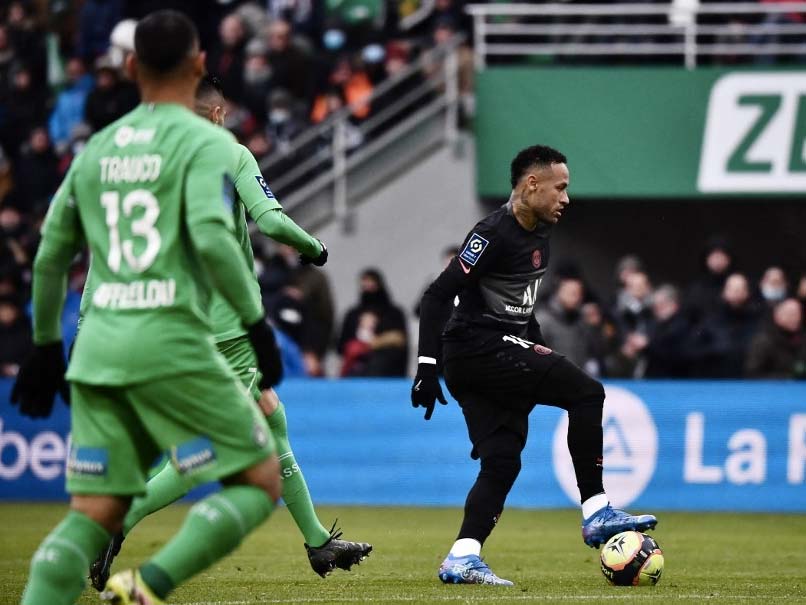 Neymar was stretchered from the pitch in tears after suffering an ankle injury at Saint-Etienne.© AFP

Neymar is expected to be sidelined for between six and eight weeks after sustaining ligament damage to his left ankle, Paris Saint-Germain said on Monday. The Brazil star was stretchered from the pitch in tears after suffering the injury in the final minutes of Sunday's 3-1 victory at Saint-Etienne. "The examinations carried out last night confirm that Neymar Jr is suffering from a sprained left ankle with ligament damage," PSG said in a statement, adding that a further update would be made in 72 hours.

Neymar had started 13 of the past 15 games for PSG this season after an injury-plagued four years in France, but he faces another lengthy absence after landing awkwardly following a challenge by Saint-Etienne's Yvann Macon.

The 29-year-old posted a video Monday of himself wearing a pressotherapy boot on his left leg.

"These runs of bad luck are part of an athlete's life," he said Sunday on Instagram.

"That's the way it is now, you have to pick yourself back up and move forward. I'll be back better and stronger," he added.

Neymar should return in time for the last 16 of the Champions League in mid-February. PSG are guaranteed to advance as runners-up of Group A behind Manchester City.

Mauricio Pochettino's side sit 12 points clear of Rennes in Ligue 1 with 13 wins from 15 matches.

Brazil have already qualified for next year's World Cup in Qatar, meaning he is unlikely to be rushed back for games against Ecuador and Paraguay on January 27 and February 1.

PSG also announced that Marco Verratti has resumed training ahead of Wednesday's match at home to third-placed Nice. The Italy midfielder has missed the past two games with a thigh problem.

Paris SG Neymar Football
Get the latest updates on ICC T20 Worldcup 2022 and CWG 2022 check out the Schedule, Live Score and Medals Tally. Like us on Facebook or follow us on Twitter for more sports updates. You can also download the NDTV Cricket app for Android or iOS.