La Liga: Eden Hazard struck in the 94th minute to help Real Madrid to a 2-2 draw against Sevilla. 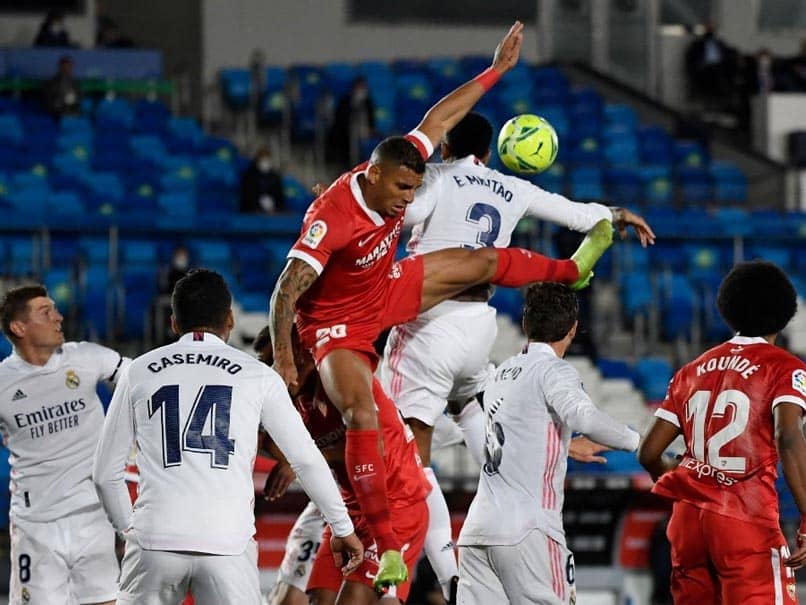 Eden Hazard's 94th-minute equaliser salvaged Real Madrid a dramatic 2-2 draw against Sevilla on Monday as an extraordinary penalty decision swung La Liga's title race back in Atletico Madrid's favour. Zinedine Zidane's side had levelled through Marco Asensio midway through the second half and thought they had a penalty when Karim Benzema was brought down after rounding Sevilla goalkeeper Yassine Bono.

But VAR prompted referee Juan Martinez Munuera to check an Eder Militao handball a few seconds before, with a huge decision seeing Madrid's penalty cancelled and a spot-kick awarded to Sevilla instead.

Ivan Rakitic converted and while Madrid still managed to hit back in injury time, Toni Kroos' shot deflecting in off Eden Hazard's foot, the draw hands the advantage back to Atletico at the end of another dramatic weekend in the Spanish title race.

"They have to explain the exact rules of the hands to me," said Zidane afterwards. "But now we have to think about the next game. It is not up to us now, but we will fight to the end, to the death."

After Barcelona and Atletico played out a goalless draw on Sunday at Camp Nou, the second instalment of La Liga's blockbuster weekend also finished honours even, meaning the situation at the top is unchanged with three games now remaining.

Atletico are two points clear of both Real Madrid and Barcelona, with the title very much back in their hands.

A Sevilla victory might have given them an outside chance but instead they remain six points back and are surely out of the running.

"We're disappointed but we are not going to give up," said Sevilla coach Julen Lopetegui. "We are going to try to keep this dream going a little longer."

With a superior head-to-head record over Barcelona, Real Madrid scraping a draw could also yet prove decisive, given they only have to overtake one team now instead of two.

"It's a shame but we're alive," said Luka Modric. "We have seen that everyone is dropping points so you have to have faith."

Hazard had to come off the Real bench after his controversial reaction to the Champions League defeat by Chelsea and while the equaliser was eventually credited to him, there was hardly a sense of redemption given how little the Belgian knew about it.

Sevilla had 75 per cent of the ball in the first 10 minutes but it felt like more, with Madrid chasing shadows and incapable of escaping their own half.

They scored with their first attack, Benzema rising above Jules Kounde to head in, only for the goal to be chalked off, with Alvaro Odriozola offside in the build-up.

Madrid looked jaded, the usually reliable Modric guilty of sloppy passes while Kroos and Casemiro struggled to affect the game.

Sevilla took the lead in the 22nd minute and it was brilliantly worked, a short free-kick down the right improving the angle before Rakitic's cool header down gave Fernando Reges the chance. He dummied past the diving Casemiro before slotting in.

Madrid emerged early after half-time. Vinicius Junior poked onto the outside of the post after a clever short corner before Modric departed for Asensio, who scored 65 seconds after coming on.

Sevilla's Joan Jordan was caught in midfield and Benzema sped away. Asensio looked like he had overrun the ball but it was returned to him by Kroos and he swept first time into the net.

Madrid had the momentum and they thought they had a penalty before the pendulum swung one way and then the other in a matter of seconds.

Sevilla's corner was cleared and Benzema was sent through one-on-one, rounding Bono and going down for what looked an obvious spot-kick.

Instead, Martinez was prompted to look at the monitor, where he saw Militao had dangled an arm onto the ball before Sevilla's corner was cleared.

Both benches made their feelings clear while the voices from the stand in front of Martinez, most of them belonging to Madrid, insisted the ball had struck Militao's back.

But Martinez cancelled Madrid's penalty and awarded one to Sevilla instead, with Rakitic stepping up and slotting into the corner.

Hazard came on and the drama was not yet finished. Kroos ghosted forward in the 94th minute and fired off a shot that deflected off the Hazard's foot and in.

Madrid still had two minutes to find a winner and they almost got it, Casemiro's effort curling agonisingly wide.

Sevilla Eden Hazard Football
Get the latest updates on IPL 2021, IPL Points Table , IPL Schedule 2021 , live score . Like us on Facebook or follow us on Twitter for more sports updates. You can also download the NDTV Cricket app for Android or iOS.