La Liga: Real Madrid See Off Eibar Ahead Of Liverpool And Barcelona Tests

A patched-up Real Madrid began a crucial week by beating Eibar 2-0 on Saturday to increase the pressure on Atletico Madrid at the top of La Liga. 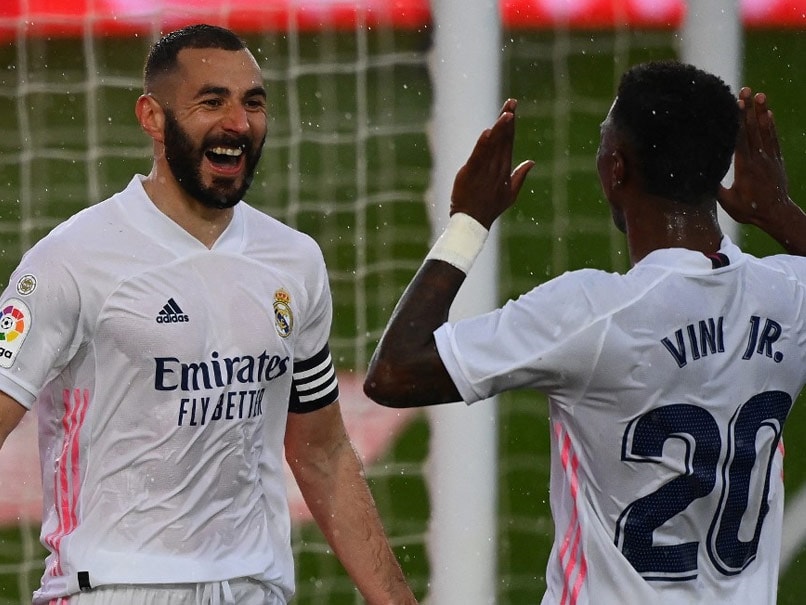 Karim Benzema scored in the 73rd minute to seal the win for Real Madrid on Saturday.© AFP

A patched-up Real Madrid began a crucial week by beating Eibar 2-0 on Saturday to increase the pressure on Atletico Madrid at the top of La Liga. With Liverpool to come in the Champions League on Tuesday and a Clasico against Barcelona next weekend, Madrid welcomed a comfortable win thanks to goals from Marco Asensio and Karim Benzema. Victory means Atletico's advantage over Zinedine Zidane's side is reduced to three points before they play away at Sevilla on Sunday night. Barcelona, who are four points off the top, host Real Valladolid on Monday. Zidane picked a makeshift starting line-up but not by choice, with Raphael Varane and Toni Kroos both on the bench, the latter after returning early from international duty due to a muscle problem.

Sergio Ramos, Dani Carvajal and Eden Hazard were all injured and left out completely.

None of those three are expected to return against Liverpool at Valdebebas in midweek but a hesitant Eibar performance offered Zidane the chance to take off the likes of Luka Modric, Benzema and Asensio in the second half.

Benzema will be essential to Madrid's hopes of reaching the semi-finals, and of beating Barcelona too, after the Frenchman made it 11 goals in his last 10 games.

He looked refreshed, with his exclusion from the national team continuing to be of benefit to Real Madrid.

But Asensio was arguably the star of the show, his lively display in the front three likely to earn him a starting spot in the trio of crunch games now to come.

Eibar, who stay 19th, would have suffered a heavier defeat were it not for three goals being chalked off for offside.

Benzema twice went close early on but was denied by Marko Dmitrovic after latching onto Alejandro Pozo's backpass and then was the first to be ruled offside, having headed in Marcelo's cross.

The excellent Asensio hit the crossbar with a free-kick from out wide and then flicked in Isco's shot, only for the flag to go up again.

Madrid though kept coming, and so did Asensio. Casemiro intercepted Pape Diop's pass in midfield and steered a superb ball through to Asensio, whose cushioned touch took him away from Anaitz Arbilla and left him with a simple finish.

Modric and Asensio went off after the hour as torrential rain added to the sense Real Madrid needed a second, with Thibaut Courtois scrambling back just in time after misjudging a back pass.

Casemiro curled in from the edge of the area but again, the goal was ruled out, until Benzema headed in to make the victory secure, capitalising on an impressive run down the left from Vinicius Junior.