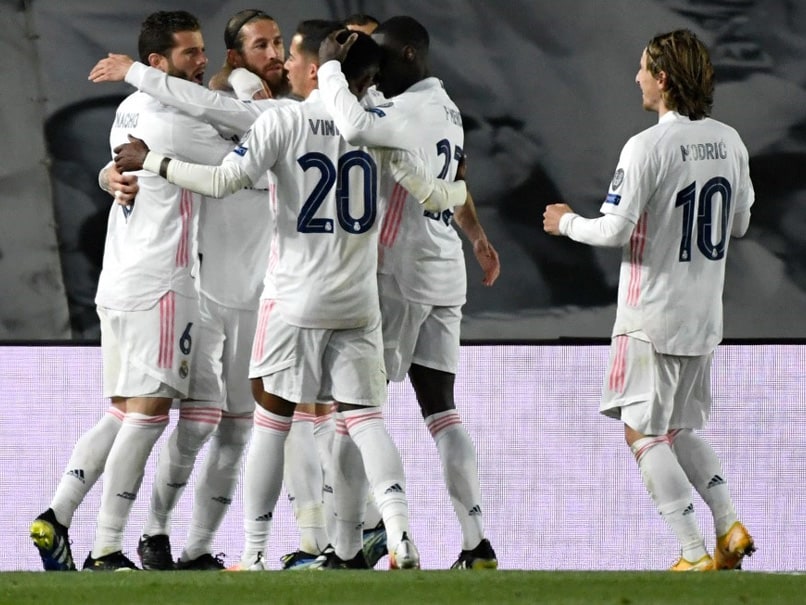 Real Madrid qualified for the Champions League quarter-finals for the first time in three years.© AFP

Real Madrid avoided another early Champions League exit on Tuesday by beating Atalanta 3-1 to win the tie 4-1 on aggregate and reach the quarter-finals for the first time in three years. Sergio Ramos marked his return from injury by converting a penalty after Karim Benzema continued his scoring streak by capitalising on a glaring error from Atlanta goalkeeper Marco Sportiello. Sportiello's scuffed clearance in the first half resulted in Benzema being given an easy finish at the Alfredo di Stefano stadium and after an electric start, Atalanta never really recovered.

Luis Muriel pulled one back for the visitors late on but any hopes of a comeback were quickly dashed as substitute Marco Asensio fired in a third for Madrid.

Zinedine Zidane's side will be in Friday's draw for the last eight and with their old guard fit and firing again, they will be hopeful of exceeding what are now dampened expectations of La Liga's reigning champions.

"We showed tonight how much hunger there still is in this team," said Luka Modric. "We can go far. How far let's see but today was an important step."

Ramos played just over an hour in his second appearance since recovering from a knee injury while Benzema's goal was his eighth in as many games and 70th in the Champions League, making him only the fifth player to reach that number.

The 35-year-old Modric and Toni Kroos were dominant in the absence of the suspended Casemiro.

"I feel 27!" joked Modric. "The years on your passport don't matter, it's about what you do on the pitch."

How Madrid's veterans would fare against more polished opposition remains to be seen, after they came up short against Manchester City last year and Ajax the year before that, both in the last 16.

They will be unlikely to benefit from the same generosity Atalanta afforded them across the two legs.

Remo Freuler's red card and a late goal spoiled the Italians' night in Bergamo and it was individual errors from Sportiello and then Rafael Toloi for the penalty that let them down again in Madrid.

"We started strong and we were succeeding with our pressing," said Muriel. "It's a shame because from our two mistakes came the two goals that cut our legs from under us."

Atalanta tore into Madrid early on, with the intensity of their press giving their opponents no time to settle and Robin Gosens could have scored, only to fail to connect with Muriel's cross.

The early storm weathered, Madrid found their feet as Kroos began to dictate from deep and the tireless Modric popped passes around Atalanta's midfield.

The lively Vinicius Junior took too long after a neat one-two with Benzema, who then showed the youngster how it should be done.

Sportiello's clearance was tamed by Modric, whose second touch pushed the ball into the box before a third cut the ball back to Benzema, who had an open net.

The goal killed Atalanta's belief and Vinicius almost added a second after half-time, only to prod wide after a surging run to the edge of Atalanta's six-yard box.

But the warning was not heeded and Vinicius raced past Toloi, whose dangling leg made enough contact to concede the penalty, which Ramos whipped into the corner.

Ramos signalled to the bench that his work was done and he departed shortly after, before Benzema headed Lucas Vazquez's cross at Sportiello and the rebound against the post.

Muriel gave Atalanta hope by curling in a superb free-kick with eight minutes left but in an instant it was gone again, as Asensio drove in a third.

Sergio Ramos Marco Asensio Football
Get the latest updates on ICC T20 Worldcup 2022, check out the Schedule and Live Score. Like us on Facebook or follow us on Twitter for more sports updates. You can also download the NDTV Cricket app for Android or iOS.