Barcelona surrendered their perfect record in La Liga, as well as a two-point advantage over Real Madrid. 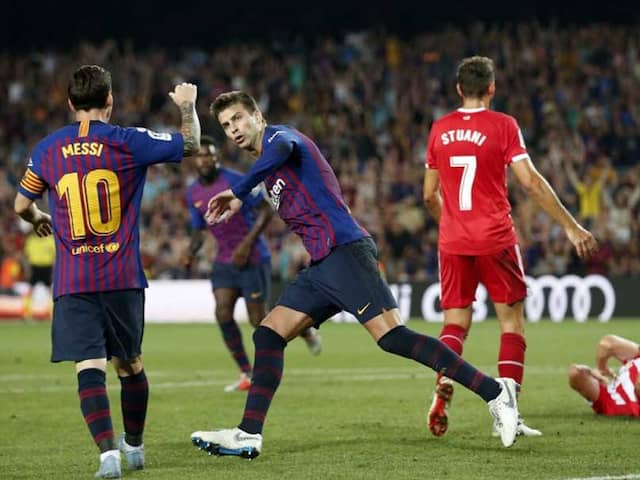 Gerard Pique salvaged a point for Barcelona vs Girona.© AFP

American fans will be licking their lips if this is what awaits Miami's Hard Rock Stadium in January after Barcelona and Girona played out an enthralling 2-2 draw at the Camp Nou on Sunday. There were four goals, one for Lionel Messi and two for Girona's Cristhian Stuani, not to mention a controversial red card shown to Barca defender Clement Lenglet. Gerard Pique salvaged a point for the hosts to complete his own blockbuster night, after clearing one shot off the line and making mistakes for each of Girona's goals.

By the end, Barca had surrendered their perfect record in La Liga, as well as a two-point advantage over Real Madrid. They return to the top of the table, but only on goal difference. Girona move up to sixth.

"For us, this is a triumph," Stuani said. "Coming here and getting this result is so valuable for us."

Hanging over this game was always the wider prospect of it not being returned, given La Liga's desire to move the reverse fixture at Girona's Estadi Montilivi on January 26 to the United States.

For all the opposition, however, there was a noticeable lack of complaint at the Camp Nou, where there were chants for Catalan independence but precious little in opposition to a trip to Miami.

A point may not be viewed as a bad return either for Barca, having played through the best part of an hour with 10 men, but changes made by coach Ernesto Valverde failed to hit the mark.

Lenglet came in for Samuel Umititi, presumably to bed in next to Pique, given Umtiti is suspended for Barcelona's Champions League game against Tottenham later this month.

But he was, perhaps harshly, sent off in the 35th minute with Barca one up, and they then conceded before Umtiti came on at half-time. Arthur and Arturo Vidal - also brought in - were substituted before the hour.

"When we got the red card, our intention was to make a change but we had to let him (Umtiti) warm-up," Valverde said. "It looks like an error on my part."

Messi and Pique had changed too, each shaving their beards, but it had contrasting effects based on the evidence of the first half.

Within 19 minutes, Messi had put Barca ahead, a slick finish into the corner finishing off Vidal's pass for the Argentinian's eighth goal in six games.

Pique, however, was at fault for the equaliser, a lethargic attempt at a clearance allowing Stuani to poke the ball past Marc-Andre ter Stegen.

Girona had been spurred on by Lenglet's red card, after VAR showed the French defender landed an elbow into the face of Pere Pons, and referee Jesus Gil deemed it deliberate.

The red card rippled through the French contingent as Lenglet's dismissal meant Ousmane Dembele was replaced by Umtiti at half-time.

It made little difference as Girona, and Stuani, scored another six minutes after the restart, with Pique again the one culpable.

First, he was outrun by Portu and then he brought the striker down from behind for what was probably a penalty. Portu's shot was pushed away by Ter Stegen but Stuani banged in the rebound.

Valverde replaced Vidal and Arthur with Philippe Coutinho and Ivan Rakitic, and Messi struck the crossbar with a free-kick soon after.

He was involved in the last goal too as a brilliant exchange with the lively Luis Suarez saw the latter's shot loop across the box. Pique leapt high to head in.

Earlier, Ben Yedder scored a hat-trick as Sevilla thrashed Levante 6-2 while Real Betis came from behind to draw 2-2 at home to Athletic Bilbao. Valencia and Villarreal drew 0-0.