Barcelona won again without the suspended Lionel Messi on Sunday, as goals from Frenkie de Jong and Riqui Puig were enough to secure a scruffy 2-0 win over Elche in La Liga. 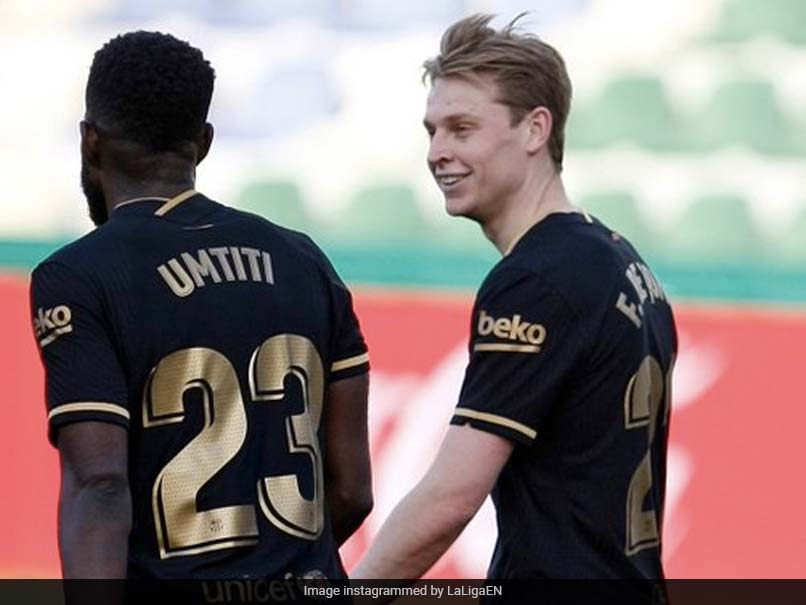 Frenkie de Jong poked the ball over the line just before half-time at the Martinez Valero.© Twitter

Barcelona won again without the suspended Lionel Messi on Sunday, as goals from Frenkie de Jong and Riqui Puig were enough to secure a scruffy 2-0 win over Elche in La Liga. De Jong poked the ball over the line just before half-time at the Martinez Valero, which would have proved a suitably scrappy winner before Puig came off the bench to head in a second late on. Despite an uninspiring performance, Ronald Koeman will be relieved to see Barca make it two consecutive victories without Messi and since their loss in the Spanish Super Cup final last weekend to Athletic Bilbao, after an extra-time victory over Cornella in midweek.

Messi is still serving his punishment for being sent off in Seville, but the Argentinian will be available again for Wednesday's Copa del Rey tie away at Rayo Vallecano.

In his absence, De Jong stepped up, continuing his own resurgence in recent weeks with one of the simplest goals he will ever score and then an assist, following a more impressive run and cross for Puig.

"We are a better this year. We've had to play all our games away and in La Liga we have won all of them so I think we have done well," said De Jong.

"For me, playing better is not just about goals and assists but I'm happy of course to score and assist today."

The win moves Barca back up to third in La Liga, three points behind Real Madrid and seven adrift of leaders Atletico Madrid, who have two games in hand. Atletico play one of them at home to Valencia later on Sunday.

Elche stay 19th, without a league win since October.

De Jong stabbed in on the line in the 39th minute for what was about to be an own-goal, after Diego Gonzalez diverted Martin Braithwaite's cross towards his own net.

Trincao twice went close to a second before Puig made sure, De Jong driving clear down the right before chipping a pass into the box for the 21-year-old to head home.

Atletico Madrid Football
Get the latest updates on India vs South Africa and check out  Schedule, Results and Live Score. Like us on Facebook or follow us on Twitter for more sports updates. You can also download the NDTV Cricket app for Android or iOS.