Real Madrid were held to a 2-2 draw by Celta Vigo thanks to a late goal by Santi Mina. 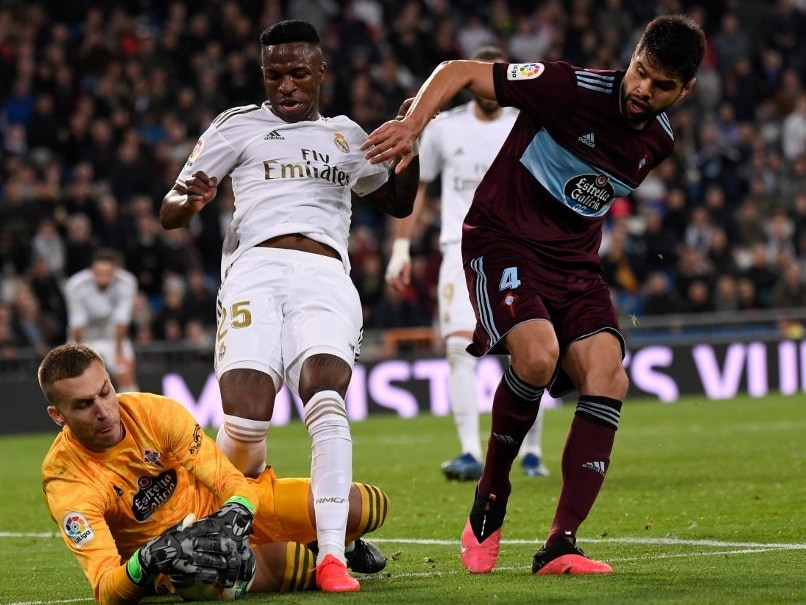 The match between Real Madrid and Celta Vigo ended in a 2-2 draw.© AFP

Real Madrid's winning streak ended when they conceded a late goal to draw 2-2 at home to Celta Vigo and finish the weekend with their lead over Barcelona down to one point. Real manager Zinedine Zidane was philosophical. "There's nothing to explain, it's just the way things are, it's football," he said. "I'm not worried about it, but I'm disappointed, as always when you drop two points at home." Barcelona beat third place Getafe on Saturday to open a 10-point gap on the chasing pack. Sevilla could have climbed to third on Sunday but were held, 2-2, at home by rock-bottom Espanyol.

Real had won five straight in La Liga to accelerate past Barcelona. On Sunday they welcomed back Eden Hazard, who had been out since November. Coach Zinedine Zidane also recalled his other 100 million euro player Gareth Bale to complete an all-star attack with Karim Benzema.

Yet Celta leapt into the lead after seven minutes. A pass from Iago Aspas sent Fedor Smolov galloping clear up the middle and he shot low past Thibaut Courtois.

"There were mistakes, especially for the first goal," said Zidane. "We were not well positioned, it happens, and it'll happen to us again."

Celta had only climbed out of the relegation places the weekend before and looked anxious and overawed on the ball.

Real again dominated the start of the first half.

Sergio Ramos, already playing as an extra striker, slammed the ball into the net but had been standing offside.

In the 52nd minute, Marcelo, not for the first time, found space on the left. His low cross deflected to Toni Kroos following the attack. The German drilled in the equaliser. It was the sixth straight season Kroos had scored against Celta.

In the 65th minute, goalkeeper Ruben Blanco pulled down the impressive Hazard. Ramos slammed the penalty into the bottom corner of the net.

"We're glad he's back," said Zidane who took the Belgian off in the 73rd minute.

"We know what he can do for us. He didn't go further than we planned after three months out," Zidane said. "He was involved in a lot of attacking action."

With four minutes left, a sharp pass from Denis Suarez, who had come on in the 71st minute, caught the Real back four rigid on the edge of their own area. Santi Mina, who had been on for just two minutes, raced onto the ball and drilled a shot past Courtois.

Real play Levante in the league next Sunday before entertaining Manchester City in the Champions League.

"Now we have to prepare for our next game, because after that it's going to get harder and harder."

Real Madrid also used the match Sunday to send a message to China.

The players came on before the match wearing shirts with the Chinese message "China, come on!"

During the game the advertising hoardings flashed up the English message "Wuhan! Come on! We support you!"

"Real Madrid wishes to express its full support for all of the people affected by the coronavirus," the club tweeted in English.

Yao Fei, Charge d'Affaires in China's Madrid embassy, responded with a tweet of thanks in Spanish.

"A million thanks to Real Madrid for their valuable support for China in the fight against the coronavirus! Victory will be ours!"

The point ensured Celta stayed just outside the relegation places ahead of Mallorca, who beat Alaves on Saturday, on goal difference. The pair are two points clear of Leganes, who drew with Betis on Sunday and Espanyol who drew at Sevilla.

Sevilla missed a chance to exploit Getafe's loss to Barcelona and fourth-placed Atletico Madrid's 2-2 draw at Valencia on Friday.

Lucas Ocampos headed Sevilla in front after 14 minutes before Adrian Embarba levelled the scores with a free-kick.

China winger Wu Lei put the away side ahead five minutes after the break.

After Victor Sanchez was sent off Suso exploited Sevilla's man advantage to score his first goal for the club since arriving on loan from AC Milan last month.

Sergio Ramos Toni Kroos Football
Get the latest updates on IPL Auction 2023 and check out  IPL 2023 and Live Cricket Score. Like us on Facebook or follow us on Twitter for more sports updates. You can also download the NDTV Cricket app for Android or iOS.