The draw brings an end to Ronald Koeman's perfect start as Barcelona manager but he might not be too displeased with a point, even if his team also had chances to snatch a winner. 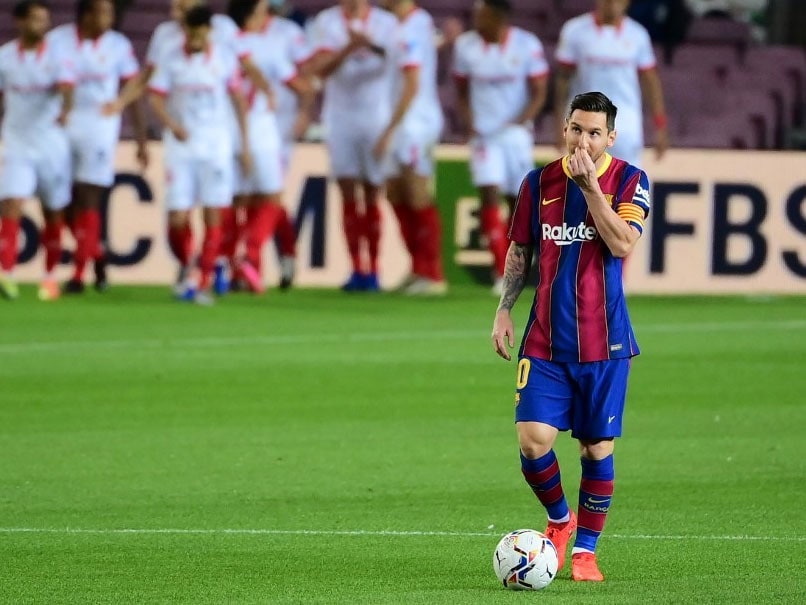 Barcelona dropped their first points of the season on Sunday as Sevilla made a statement of intent.© AFP

Barcelona dropped their first points of the season on Sunday as Sevilla made a statement of intent in La Liga's title race by drawing 1-1 at Camp Nou. Luuk de Jong gave Sevilla an early lead and while Philippe Coutinho levelled two minutes later, the visitors were arguably the better side in a frantic contest. The draw brings an end to Ronald Koeman's perfect start as Barca coach but he might not be too displeased with a point, even if his team also had chances to snatch a winner. "We were less energetic than in the first two games but that also depends on the opposition," said Koeman. "They have defended well."

Real Madrid are three points ahead of Barcelona but having played a game more, after their 2-0 win over Levante earlier on Sunday sent them to the top of the table.

Goals from Vinicius Junior and Karim Benzema sealed victory for the reigning champions, who have now won three games on the bounce.

Neither Madrid nor Barca are expected to be busy on the last day of the transfer window on Monday, with both clubs finding themselves financially restricted by the coronavirus pandemic.

But some players could be allowed to leave and it was noticeable that Koeman left Ousmane Dembele on the bench, even as his team searched for a winner.

Koeman preferred to bring on the youthful duo of Francisco Trincao and Pedri.

"Things can happen," said Koeman afterwards when asked about Dembele. "Right now he's a Barca player, let's see. There is one day left, players can come in or go out."

Antoine Griezmann also offered very little down the right but the Frenchman will be given more time under Koeman.

Luka Jovic was dropped to the bench by Zinedine Zidane and not brought on, but he is expected to stay after the departure of Borja Mayoral to Roma.

De Jong put Sevilla in front after eight minutes as Barcelona failed to react to a short corner and then failed to clear, the ball sitting up nicely for the striker to smash in.

'We had to suffer'

But the lead lasted less than two minutes, a brilliant, curved ball over the top by Lionel Messi causing panic in the Sevilla defence, where Jesus Navas slid to intercept but only teed up the resurgent Coutinho to finish.

Messi sent a bending shot past the far post and Ansu Fati hit straight at the goalkeeper but Sevilla were the ones in the ascendancy.

Barcelona struggled to get out from the back under pressure from Sevilla's high press and Ronald Araujo almost scored an own goal, spared by the post after Youssef En-Nesyri's run down the left.

Trincao and Pedri were both thrown on by Koeman and Trincao might have won it after being put through by Messi late on. But Sevilla goalkeeper Bono made the stop to earn his team a deserved point.

Madrid, meanwhile, registered a third clean sheet in four games to see off Levante as Vinicius and a late strike from Benzema sealed victory.

"We had to suffer," said Zinedine Zidane. "We had chances in the second half to kill the game and that would have made it different. We suffered a lot because they also had chances."

Zidane's team have become something of a defensive juggernaut after their solidity and resilience formed the basis of their successful title bid last term.

Levante have managed only one victory from their first four matches and this defeat meant they dropped into the relegation places.

Vinicius gave Madrid the lead after 16 minutes when Levante failed to clear a corner and the Brazilian calmly curled in for his second goal in as many games.

He could have made it two but overhit a pass intended for Benzema and then Levante hit the crossbar, Nikola Vuckevic at the back post almost capitalising on some hesitation from Thibaut Courtois.

Levante found it difficult to cope with Madrid's pressing and Benzema and Vinicius both should scored when twice they won the ball back in dangerous positions.

Sergio Ramos also had a headed goal ruled out for offside but Levante went close to a late equaliser as Clerc and Enis Bardhi both tested Courtois.

Instead, Benzema tore away on the break in injury-time and finished to complete a convincing win.