La Liga: Real Madrid move to the top of the points table with a 2-0 win over Levante. 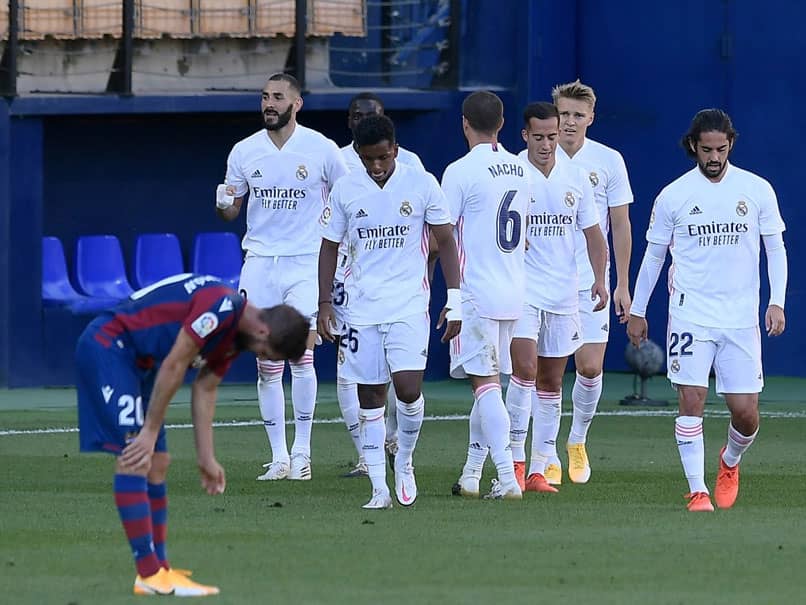 Real Madrid moved to the top of La Liga on Sunday as Vinicius Junior and Karim Benzama both scored in a 2-0 win over Levante. Vinicius, who had proved decisive in Madrid's win over Real Valladolid on Wednesday, looked set to see off Levante as well, before Benzema notched his first goal of the season late on. Madrid have now recorded three clean sheets from their four opening games, although a draw away at Real Sociedad has given an early advantage to Barcelona, who play away at Sevilla later on Sunday. Madrid and Barca had earlier played out the first ever women's Clasico after Madrid finally launched their female team this season. Yet Barcelona showed their superiority in a 4-0 rout.

But the men's team have become something of a defensive juggernaut under Zidane after their solidity and resilience formed the basis of their successful title bid last term.

They have 10 points from 12 available, after three consecutive wins.

Levante, meanwhile, have managed only one victory from first four matches and this defeat means they drop into the relegation places.

Vinicius gave Madrid the lead after 16 minutes when Levante failed to clear a corner and the Brazilian calmly curled in for his second goal in two games.

He could have made it two but overhit a pass intended for Benzema and then Levante hit the crossbar, Nikola Vuckevic at the back post almost capitalising on some hesitation from Thibaut Courtois.

Levante found it difficult to cope with Madrid's pressing and Benzema and Vinicius both should scored when twice they won the ball back in dangerous positions.

Sergio Ramos also had a headed goal ruled out for offside but Levante went close to a late equaliser as Clerc and Enis Bardhi both tested Courtois.

But Benzema tore away on the break in injury-time and finished to complete a convincing win.

Sergio Ramos
Get the latest updates on India vs England Series, India vs England , live score and IPL 2021 Auction . Like us on Facebook or follow us on Twitter for more sports updates. You can also download the NDTV Cricket app for Android or iOS.