Kylian Mbappe hobbled off in the first half of the French Cup final after a dreadful tackle by Saint-Etienne captain Loic Perrin. 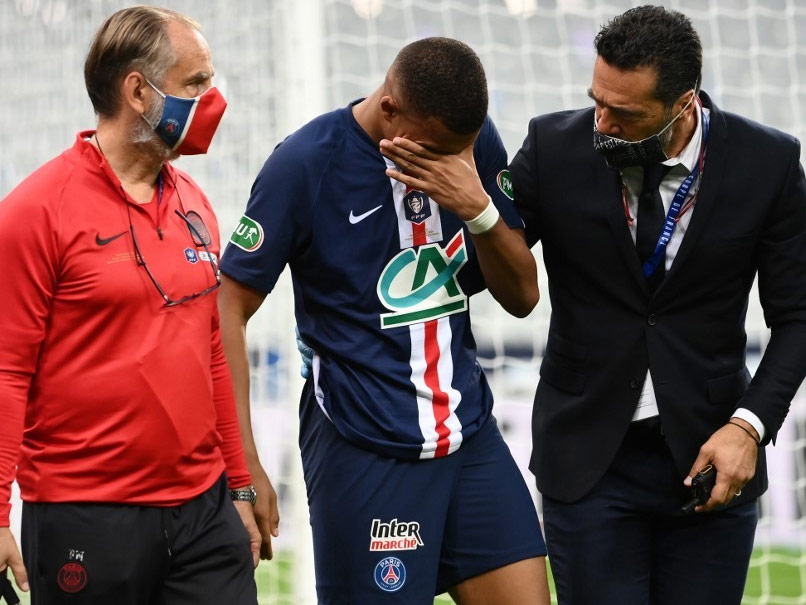 Kylian Mbappe is doubtful for the Champions League after suffering an ankle injury.© AFP

Paris Saint-Germain's Kylian Mbappe is doubtful for the Champions League after suffering a serious ankle injury in the French Cup final, the French champions announced on Saturday. Mbappe hobbled off in the first half of Friday's game after a dreadful tackle by Saint-Etienne captain Loic Perrin. And after tests PSG revealed that their 21-year-old star had "a sprained right ankle with significant ligament damage". The news is a major blow for PSG with Mbappe out of next Friday's French League Cup final and unlikely to be fit in time for next month's Champions League quarter-final against Atalanta in Lisbon.

He received lengthy treatment but was eventually substituted after the tackle which earned Perrin a red card.

"Everyone is worried. Everyone who saw the foul is worried. Of course I'm worried," said PSG coach Thomas Tuchel after his team's 1-0 win.

"It did crack a bit for sure," Mbappe was heard on camera telling French President Emmanuel Macron who was attending the first competitive game in France since the coronavirus lockdown.

PSG face Lyon in the French League Cup final before resuming their European campaign in a straight knockout tournament at the Estadio da Luz on August 12.

Mbappe's misfortune revived memories of the injuries that forced Neymar, scorer of Friday's decisive goal, to miss Champions League last-16 ties in both 2018 and 2019.

Atalanta Kylian Mbappe Football
Get the latest updates on Fifa Worldcup 2022 and check out  Fifa World Cup Schedule, Stats and Live Cricket Score. Like us on Facebook or follow us on Twitter for more sports updates. You can also download the NDTV Cricket app for Android or iOS.