"Everyone Is Worried": Kylian Mbappe On Crutches As Champions League Looms

A tearful Kylian Mbappe was replaced but the greater concern for PSG will be the severity of his injury ahead of next month's Champions League quarter-final. 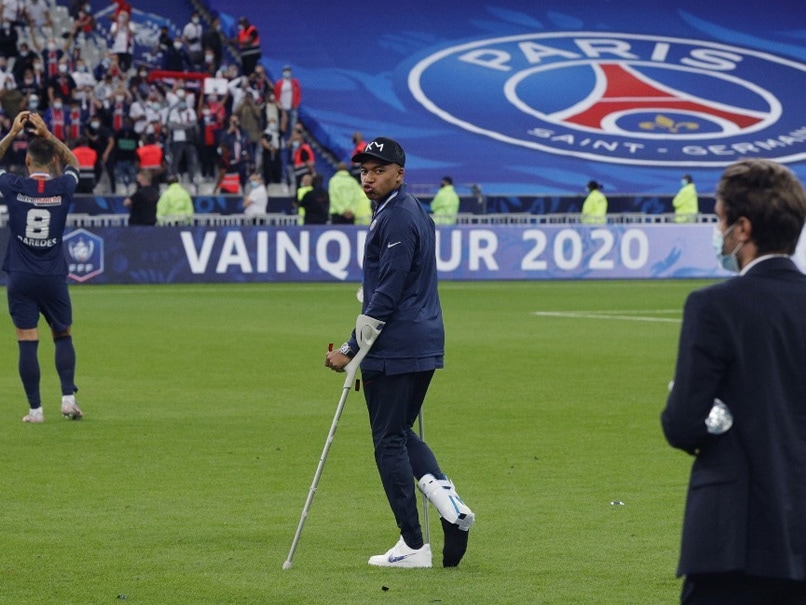 Kylian Mbappe hobbled off in the first half of Friday's French Cup final with an ankle injury.© AFP

Paris Saint-Germain coach Thomas Tuchel said "everyone is worried" after Kylian Mbappe hobbled off in the first half of Friday's French Cup final with an ankle injury after a dreadful tackle by Saint-Etienne captain Loic Perrin. Mbappe received lengthy treatment but was eventually substituted after his right ankle was caught by a clumsy Perrin challenge that resulted in a red card for the centre-back in likely his final game for Saint-Etienne. "Everyone is worried. Everyone who saw the foul is worried. Of course I'm worried," said Tuchel after his team's 1-0 win.

"We have to be patient because we don't have any news. I think he will undergo tests tonight."

A tearful Mbappe was replaced by Pablo Sarabia but the greater concern for PSG will be the severity of his injury ahead of next month's Champions League quarter-final against Atalanta in Lisbon.

He reemerged from the Stade de France tunnel later in the second half on crutches.

"It's the third game against Saint-Etienne and it's a third red card, each time in the first 30 minutes," added Tuchel.

PSG face Lyon in the French League Cup final next Friday before resuming their European campaign in a unique straight knockout tournament at the Estadio da Luz on August 12.

"I hope Kylian is going to recover as quickly as possible because he's a vital player for us," said PSG captain Thiago Silva.

Atalanta coach Gian Piero Gasperini said he was "sorry" to hear of Mbappe's injury and hoped it was "nothing serious" ahead of next month's European clash.

Saint-Etienne boss Claude Puel admitted the forward was simply too quick for the 34-year-old Perrin.

"I hope it's a minor injury for Kylian. The intention was to play the ball but it's true that he was too fast," said Puel.

Atalanta St. Etienne Kylian Mbappe Neymar Football
Get the latest updates on ICC T20 Worldcup 2022, check out the Schedule and Live Score. Like us on Facebook or follow us on Twitter for more sports updates. You can also download the NDTV Cricket app for Android or iOS.